Adult condors have the largest wingspan, at nine to 10 feet, of any North American bird. 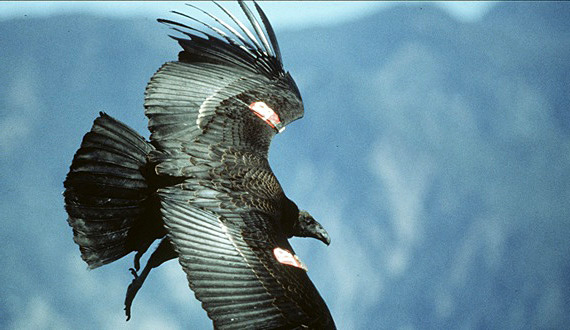 A cherished icon of the West, the prehistoric-looking California condor remains one of the world's most endangered species. North America's largest avian narrowly escaped extinction in the mid-1980s when the last 22 wild California condors became star participants in a captive-breeding program. Thanks to those efforts, more than 200 condors flew freely in California and Arizona by 2013. But recovery is still in jeopardy: A significant percentage of all released condors have died or been returned to captivity.

Poisoning by ingestion of lead shot — scavenged along with carcasses left behind by hunters — is one of the most widespread and preventable causes of condor deaths. The Center's Get the Lead Out Campaign early on asked California and Arizona to require the use of nonlead ammunition within the condor's range, resulting in California's historic Ridley-Tree Condor Preservation Act, as well as a settlement with California's wildlife agencies eliminating lead ammunition for depredation hunting (the hunting of “nuisance” animals). When the EPA denied our petition to regulate toxic lead in hunting ammo and fishing tackle nationwide — for the sake of condors and many other animals — we sued in November 2010. In May 2012, we and allies officially notified the Forest Service of our intent to sue for the agency's failure to protect condors in Arizona's Kaibab National Forest from toxic lead ammunition left behind from hunting activities.

We're also campaigning to reduce habitat loss, leading a broad coalition to preserve Tejon Ranch (a biodiversity hotspot containing vital habitat for the condor) as a national or state park — even after other conservation groups signed a compromise with the ranch's owners that would allow development in condor critical habitat. We've fought to block a series of sprawling developments that would forever change Tejon, including suing Kern County for approving the disastrous megadevelopment Tejon Mountain Village and moving against a proposal to grant the ranch's owners a “license to kill” condors to make development easier. When two condors were found shot with lead bullets in central California in spring 2009, we launched an in-depth investigation and announced a $40,000 reward to help bring the shooter or shooters to justice.

We opposed the Bush administration's plans to expand oil and gas drilling in Los Padres National Forest, including surface drilling next to the Sespe Condor Sanctuary. We submitted a comprehensive conservation plan for Southern California's four national forests to protect condors, and we're challenging the Forest Service's management plans for these forests, which would harm condor habitat. Our influence on past management plans for these forests has resulted in the inclusion of protective measures such as using nontoxic antifreeze in vehicles and retrofitting power lines to prevent condor electrocutions.

MEDIA
Press releases
Search our newsroom for the California condor