All flamingos are believed to be monogamous. 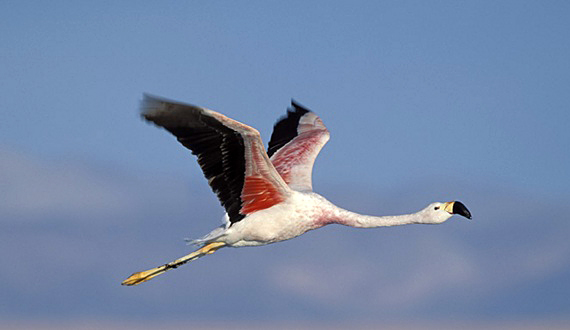 The big, beautiful Andean flamingo is one of three flamingo species native to the Andes. A relatively long-lived bird, this flamingo can travel vast distances — from 200 to more than 700 miles in a single day. Its movement appears to be highly influenced by environmental factors, particularly the status of its preferred habitat in the high Andean wetlands, whose aquifers must be recharged every summer. Unfortunately, these wetlands — and the flamingo — face a variety of threats, including mineral extraction and water diversion. Salt, borax, ulexite, sulphur, sodium carbonate, lithium and many other minerals found in the Andean wetlands are being mined unsustainably, and the wetlands' water itself is being diverted to support the mining, as well as agriculture, urban development and tourism.

MEDIA
Press releases
Search our newsroom for the Andean flamingo