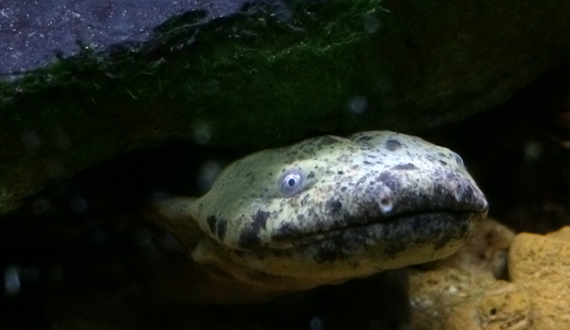 The Center has been working to secure protections for the hellbender for years. In 2010 we filed a scientific petition with the U.S. Fish and Wildlife Service to list 404 Southeast aquatic, riparian and wetland species as threatened or endangered under the Endangered Species Act, including the hellbender.

The Ozark hellbender is a subspecies of hellbender native to streams of the Ozark plateau in southern Missouri and northern Arkansas. That subspecies languished for nearly a decade on the Service's “candidate list” with dozens of other imperiled animals and plants that have been declared deserving of protection but whose federal safeguards have been postponed indefinitely.

Under the landmark agreement the Center reached with the Service to speed up protection decisions for 757 species — including the Ozark hellbender — the agency gave this incredible amphibian the “endangered” status it deserves in 2011.

We're also defending the eastern hellbender. In 2014 the Center and a large coalition of allies filed a petition for New York to put the amphibian's eastern population on the state's Endangered Species list. In 2013 it agreed to a binding deadline on a protection decision for the eastern hellbender, along with decisions for numerous other species ... but under the Trump administration the

In 2021 the Fish and Wildlife Service listed the eastern hellbender's Missouri population as endangered under the federal Endangered Species Act. This is an important win, but the Service only did this after the Center and allies filed a formal notice of intent to sue over the agency's 2019 decision, under the Trump administration, to deny protections to eastern hellbenders.

Since all eastern hellbenders need protection, in July 2021 the Center and allies sued to challenge that Trump-era decision, which belies the science showing that nearly 80% of hellbender populations have already been lost or are in decline. We won't give up until North America's largest salamander has the protection it needs.

MEDIA
Learn about the Center's hellbender work in our press releases