GIVE TODAY
Males congregate at prime breeding sites in the spring to call underwater for mates. 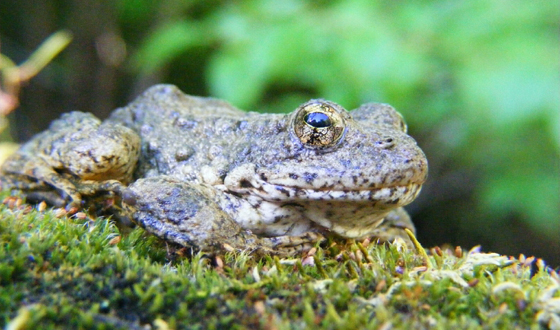 DESCRIPTION: Foothill yellow-legged frogs are small ranid frogs approximately 1.5 to 3 inches long, with females growing to larger sizes than males. Adult frogs can be grey, brown or reddish on their backs, with a distinctive lemon-yellow covering the undersides of their legs.

HABITAT: This frog lives in partially shaded, perennial streams and rivers with rocky substrate at low to moderate elevations, with a range of vegetation types; it is often found in or near riffles and on open, sunny stream banks.

MIGRATION: The species is not migratory, but adults may move modest distances along stream corridors.

BREEDING: Adult frogs congregate on sandy or rocky bars in the spring to mate. Eggs are deposited in shallow, slow-moving water with a cobble or pebble substrate, with egg masses anchored to gravel or vegetation.

LIFE CYCLE: Tadpoles hatch within five to 30 days, then burrow down into the gravel of streams. Tadpoles metamorphose three to four months after hatching. Foothill yellow-legged frogs usually reach sexual maturity after one or two years.

POPULATION TREND: This frog's population has declined more than 50 percent rangewide; it is extirpated from Santa Barbara County south to San Diego County.