Juvenile Siskiyou Mountains salamanders hatch as miniature adults, with no need for metamorphosis. 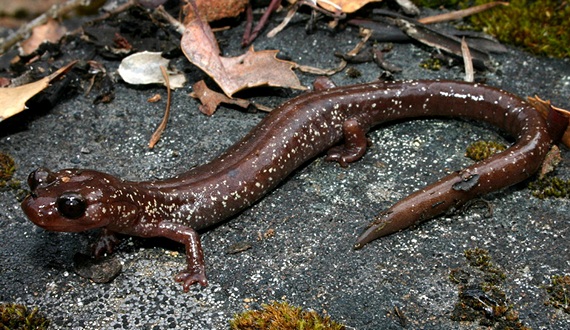 The Klamath-Siskiyou region is world-renowned for its rich biodiversity; some of the plants and animals that live only here — such as the Siskiyou Mountains salamander and the closely related Scott Bar salamander — are among the most singular in the United States. The Siskiyou Mountains salamander has the second smallest range of any western salamanders in its genus, occupying a small area on the Oregon-California border in the Klamath-Siskiyou region. This terrestrial salamander’s specialized habitat requirements, stabilized rock talus in old-growth forests, makes it highly sensitive to logging. Studies show that cutting mature forests always precipitates their decline or disappearance.

The Siskiyou Mountains salamander was once protected under the Survey and Manage Program, a provision of the Northwest Forest Plan established for unprotected species dependent on old-growth forests. The program employed a “look-before-you-log” strategy that required the U.S. Forest Service and Bureau of Land Management to survey for old-growth dependent species and create logging buffers around where the species were found. When those protections were undermined in 2004, the Center and allies filed a petition to protect both salamanders under the Endangered Species Act. To prevent the species’ listing, federal agencies signed a conservation agreement in 2007, intended to protect habitat for 110 high-priority salamander sites on federal lands in the Applegate River watershed in southern Oregon. In 2008 the Fish and Wildlife Service denied protection for the salamander based on this conservation agreement and old-growth forest protections provided by the Northwest Forest Plan.

But in 2016 the BLM adopted a Western Oregon Plan Revision, which will substantially increase logging in the salamander’s range and undermine the habitat protections of the salamander conservation agreement. The Center again petitioned for federal listing in 2018.

The loss or decline of salamanders from forest ecosystems has important consequences up and down the food chain. Salamanders play a key role in forest nutrient flow, regulating the abundance of soil invertebrates that are responsible for the breakdown of plant detritus. Salamanders' loss from forested stands is indicative of changes that will likely affect a broad array of species.