These frogs are threatened by predation by introduced trout, disease, pesticides, environmental changes from drought and global warming, and habitat degradation due to livestock grazing. 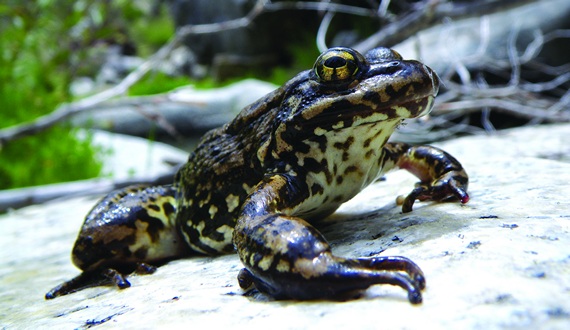 The mountain yellow-legged frog was once the most abundant amphibian in Southern California's Sierra Nevada and Transverse Ranges. Just decades ago, it was hard to walk around many of California's alpine lakes without tripping over these diminutive “mountain gnomes.”

But today these hardy survivors of freezing, high-elevation winters are vulnerable to a host of modern threats. In fact these frogs are extinct in more than 93 percent of their old mountain homes.

The mountain yellow-legged frog has two populations that have been declared separate subspecies: a northern and central Sierra Nevada population, and a southern Sierra Nevada and Southern California population. Both populations are adapted to high-elevation habitats without aquatic predators. So unsurprisingly, the main reason for the frogs' decline is the introduction of nonnative trout to alpine lakes. These fish, stocked by the California Department of Fish and Game, prey upon tadpoles and young frogs. The yellow-legged frog has disappeared from the most known historical locations, and most of the largest populations left are near collapse.

Scientists predict the yellow-legged frog could be extinct within decades.

The Center first petitioned to protect the Sierra Nevada population under the Endangered Species Act in 2000. After we won a historic 2011 settlement agreement with the Service (also affecting 756 other species) —the feds proposed protections and more than 2 million acres of critical habitat. After years of federal foot-dragging and a 2016 Center suit, we won a  settlement requiring the Service to determine whether the frog warrants protection.

Meanwhile we also defend these frogs from threats like livestock grazing and pesticides.

Check out our press releases to learn more about the Center's actions for mountain yellow-legged frogs.

MEDIA
Press releases
Search our newsroom for the yellow-legged frog