GIVE TODAY
When it's in its striped color phase, this salamander's stripe takes up about one-third of the width of its back and the top of its tail. 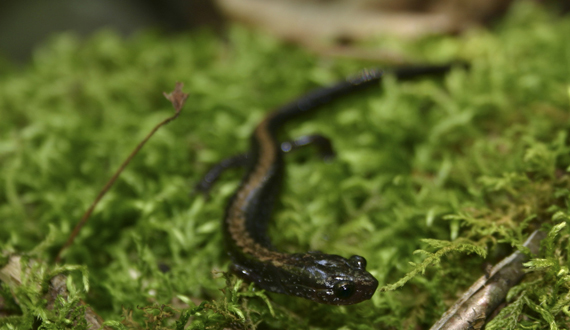 Within a typical forest in the eastern United States, salamanders are everywhere. On an acre of forest, thousands of salamanders may be foraging among the leaf litter, under logs, and in creeks hunting for insects. In fact they're often the largest group of species, by biomass, of any vertebrate in such a forest — and as a result play hugely important roles cycling nutrients through forest ecosystems. Unfortunately some kinds of salamanders, including the Shenandoah salamander, are declining rapidly and are now protected by the Endangered Species Act.

The Shenandoah salamander is a small, exclusively terrestrial salamander that is found on three mountain ridges within Shenandoah National Park. Individuals can occur in two color phases (one with a narrow red or yellow stripe on a brownish body, the other black with brass-colored flecks). The Shenandoah salamander is a woodland salamander, which means it doesn't have lungs and instead breathes through its skin surface. Because of this, its skin must remain moist at all time; as a result the animal is mainly nocturnal, hunting at night while remaining under cover during the day, and restricting activity during drought. It requires very specific habitat conditions — cool and moist montane forests above 2,600 feet, with an understory including talus or rocky debris. While the salamander has always been restricted to these high-elevation mountains in Virginia, it is under increasing threats from climate change, the spread of invasive species, pollution and human activities.

The Center is working to protect the Shenandoah salamander by focusing on the main threats to its survival: habitat fragmentation and degradation in Shenandoah National Park. Invasive species are destroying forest canopy in the park; human activities are fragmenting habitat; and the air is polluted. Acid rain in Shenandoah National Park also damages forest canopy cover, while climate change threatens to shrink the salamander's habitat as high-elevation habitat types are encroached upon by lower-elevation species.

MEDIA
Press releases
Search our newsroom for the Shenandoah salamander