When picked up, dusky gopher frogs cover their eyes with their forefeet, possibly to protect their faces until predators taste their bitter skin secretions and release them. 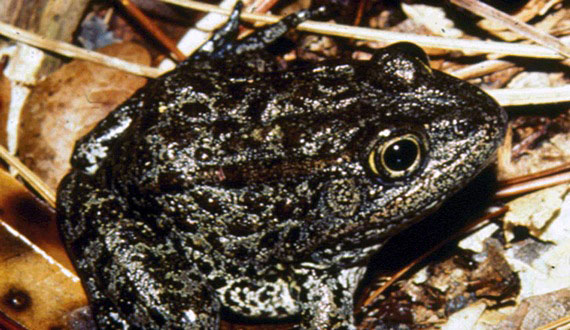 Dusky gopher frogs spend most of their lives underground, in burrows created by gopher tortoises — hence their name — and other animals. In the winter they migrate to temporary ponds to breed, and after breeding, they migrate back to the forested, longleaf-pine uplands. But 98 percent of America's native longleaf-pine forest has now been destroyed; fire suppression, drought, pesticides, urban sprawl, highway construction and the decline of gopher tortoises have made this frog so rare it now lives in only three small Mississippi ponds.

In early 2002 the dusky gopher frog was listed as an endangered species as a result of a Center lawsuit that brought a large, multi-species settlement. The frog had been a candidate for federal protection since 1983 and was in severe decline. Because the U.S. Fish and Wildlife Service had still failed to designate critical habitat for the frog six years later, the Center filed suit in November 2007 to secure critical habitat beyond the frog's main home pond. Six months after that, the Service agreed to issue a new determination on critical habitat — but when it had still failed to do so in spring 2010, the Center and the Gulf Restoration Network filed a notice of intent to sue again. A month later, the Service proposed to protect nearly 2,000 acres — and in 2012 it designated more than triple that amount, protecting 6,477 acres. After a private landowner challenged that designation, we motioned to intervene in the lawsuit in 2013, and the designation was upheld in 2016. The protection of critical habitat should drive reintroduction of the frog into additional ponds within its former range, thus giving it a real shot at survival and recovery.

The dusky gopher frog was finally granted a recovery plan —  the main tool for identifying actions necessary to save endangered species from extinction and eventually remove their protection — in 2016, after a 2012 notice of intent to sue filed by the Center and Gulf Restoration Network.

We've also worked to help the dusky gopher frog in other ways.The Center for Biological Diversity, Gulf Restoration Network and Columbus Communities — the developer of a planned community called “Tradition” in Harrison County, Mississippi — signed an agreement to protect habitat for this highly endangered frog outlining steps the parties will take to facilitate a land exchange between the developer and U.S. Forest Service to protect one of the gopher frog's last remaining breeding ponds.