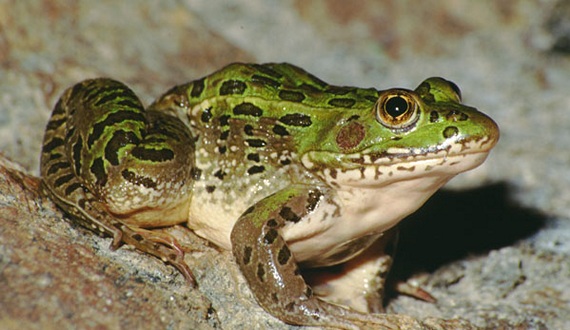 When a Chiricahua leopard frog wants attention, it snores — at least, its distinctive call sounds like a snore. But the sound of snoring around desert streams, springs and even stock tanks is a lot softer than it used to be. Once found in more than 400 aquatic sites in the Southwest, the frog is now found at fewer than 80. In Arizona, the Chiricahua has declined more than any other leopard frog.

The Center submitted a petition to list this species as federally endangered in 1998, and after two Center lawsuits, the U.S. Fish and Wildlife Service listed the frog as threatened in 2002. The Center became part of the stakeholders' group that developed a 2007 federal plan to recover the frog — advocating for reducing cattle, preserving springs and removing bullfrogs on several grazing allotments — and by August 2010, 10,000 captive-bred frogs had been reintroduced to Arizona ponds. The next year, the frog earned a proposed 11,000 acres of critical habitat in New Mexico and Arizona — but since the proposal left out important habitat in the Santa Rita Mountains, where frogs are threatened by a proposed open-pit copper mine, we wrote a letter demanding that critical habitat be expanded. We also sued the U.S. Forest Service for failing to monitor and protect habitat and endangered species in Arizona and New Mexico national forests — including the Chiricahua leopard frog — and won that lawsuit in 2015.