Males can emit mating calls from underwater and even from beneath ice. 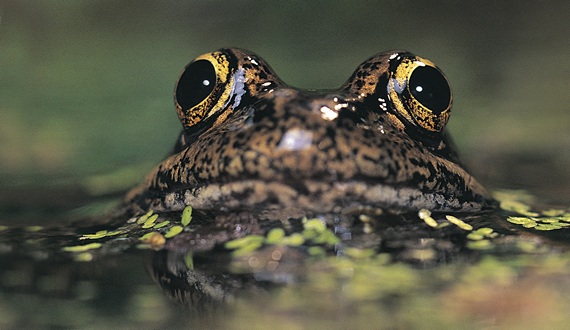 Experts agree: Mark Twain's favorite amphibian, “The Celebrated Jumping Frog of Calaveras County,” is none other than the California red-legged frog. Once so common it was a staple cuisine, California's largest native frog has now lost 90 percent of its historic population. Thanks to Center litigation, the U.S. Fish and Wildlife Service designated more than 4.1 million acres of critical habitat in 2001, but a building-industry lawsuit caused the agency to withdraw that decision — and even after Center intervention and a federal proposal to re-designate the original acreage, the Service protected only 450,288 acres. This decision, occurring through the influence of former Interior Department official Julie MacDonald, was based on a biased economic analysis and ignored scientific evidence of the species' needs.

In August 2007, the Center warned we would sue over this decision and 54 other tainted endangered species rulings. Three months later, the Service announced the reversal of six rulings, including the one slashing habitat for the frog. In December 2007, we sued to ensure that the frog's new critical habitat designation was adequate, and in 2010, the Service nearly quadrupled the designation to 1.6 million acres.

Unfortunately, the frog's habitat has also been contaminated by pesticides — to which amphibians, with their permeable skin, are highly vulnerable. The Center filed a 2002 lawsuit forcing the Environmental Protection Agency to consult with endangered species experts at the Fish and Wildlife Service to ensure that chemicals they register won't harm the red-legged frog. In 2006, we reached a settlement agreement that prohibits the use of 66 toxic pesticides in and near core California red-legged frog habitats until formal consultations with the Service have been completed. When the EPA and Fish and Wildlife Service failed to follow through, in 2011 we took both agencies back to court. In 2013, a federal district court approved a settlement requiring the Service to better protect California red-legged frogs from seven common pesticides known to be highly toxic to amphibians. The settlement gives the agency two years to prepare “biological opinions” under the Endangered Species Act to analyze pesticide use in and near the frog's aquatic and upland habitats.