Amargosa toad eggs can develop into tadpoles in as few as three days in warm water. 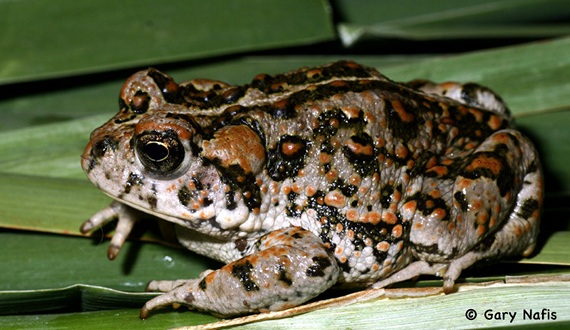 Unlike most frogs and toads, Amargosa toads never make a sound unless they're chirping their “release call” when grasped below their forelimbs. These occupants of southern Nevada's Oasis Valley, a rare and biologically diverse wetland area, use their sticky tongues to feed along the water's edge at night and by day take shelter in burrows, debris piles and vegetation. But wetlands are scarce in this amphibian's northern Mojave home, and the scores of native species they contain are increasingly threatened by human encroachment. Now more than ever, this rare, quiet amphibian needs someone to speak out on its behalf.

Although the Amargosa toad benefits from public concern and voluntary conservation measures, development, mining, grazing, water over-use, off-road vehicles and other activities have increased in this rare toad's range, a 10-mile stretch of habitat along the Amargosa River in the Oasis Valley — mostly on public lands. A huge potential threat to the toad came in 2006, when the U.S. Bureau of Land Management announced it would auction off 5,740 acres along the Amargosa River. If any public lands along the riparian corridor are sold, water extractions, flood-control activities and development will undoubtedly eradicate many of the few remaining Amargosa populations and possibly the entire species.

To protect the toad and its remaining habitat, in February 2008 the Center and Public Employees for Responsibility petitioned the U.S. Fish and Wildlife Service to list the species under the Endangered Species Act. After we filed a notice of intent to sue over the Service's delayed response, the agency announced it was launching a review of the toad's status — but in July 2010, the toad was denied listing. The Center will continue our work to protect the species, including saving its habitat from groundwater extraction and off-road destruction.

MEDIA
Press releases
Search our newsroom for the Amargosa toad