The Center's Study on How Pesticides Harm Insects and Underground Ecosystems

The 2021 peer-reviewed study Pesticides and Soil Invertebrates: A Hazard Assessment shows that pesticides widely used in American agriculture pose a grave threat to organisms needed for healthy soil, biodiversity, and the fight against climate change. We found that in 71% of cases studied, pesticides kill or harm soil invertebrates like earthworms, ants, beetles and ground-nesting bees.

We found negative effects across all studied pesticide classes, which shows that pesticides — as a set of chemical poisons — pose a clear hazard to soil life and are incompatible with healthy soil.

But U.S. regulators consider none of these harms when approving pesticides for use. 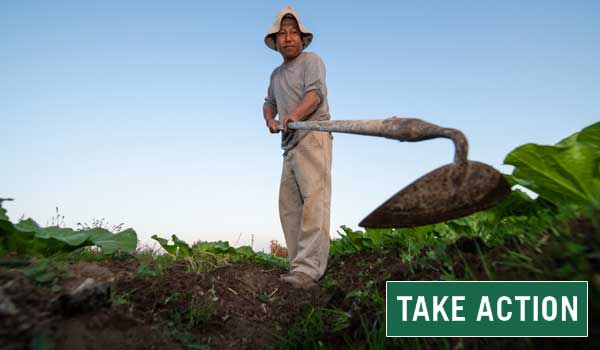 Take action now to help protect our soil from pesticides.

This study is the largest, most comprehensive review ever conducted of agricultural pesticides’ impacts on soil organisms. Published in Frontiers in Environmental Science, it was coauthored by researchers at the Center for Biological Diversity, Friends of the Earth and the University of Maryland.

Pesticides are a major driver of insect declines.

Our findings provide further evidence that pesticides are contributing to the widespread declines of insects. These declines greatly threaten the ecosystems that support all life on Earth, including the farming systems that feed people. Soils are among the planet’s most complex and biodiverse ecosystems, containing nearly a quarter of all species. A handful of soil contains about 10 to 100 million organisms.

Soil invertebrates provide essential ecosystem benefits like cycling nutrients that plants need to grow, decomposing dead plants and animals so they can nourish new life, and regulating pests and diseases.

Climate solutions in agriculture must include reduction of toxic pesticides.

The idea of regenerative agriculture and using soil as a carbon sponge to help fight climate change is gaining momentum around the world. Our findings confirm that reducing pesticide use is key to protecting soil organisms with a critical role in soil carbon sequestration.

It’s the life in soil that allows it to store carbon. A teeming ecosystem of microorganisms below ground transfers carbon from plant roots and decaying matter to stable forms in the soil. Invertebrates — the focus of this study — eat fallen plants and animals, breaking them down into forms more accessible to microorganisms, storing carbon in their own cells, and mixing organic matter into the soil as they go about their lives.

Soil biodiversity also reduces the impacts of extreme droughts and floods, which are becoming more common as the climate changes. Invertebrates like earthworms and ants are ecosystem engineers. They craft and maintain the structure of soils with their tunnels and burrows, allowing for the flow of nutrients, air and water throughout the ecosystems below ground. Healthy soil with good structure acts as a sponge — readily absorbing water during intense rains and holding on to it during dry times — improving farmers’ outcomes during weather extremes.

We analyzed 394 studies encompassing 275 unique species or types of soil organisms and 284 different pesticides or pesticide mixtures. While previous studies have looked at particular pesticide classes or types of organisms, this is the first review to incorporate all pesticide types, invertebrates that live or develop in the soil, and types of health outcomes available in the scientific literature.

According to the data, pesticides affect soil invertebrates in many ways, from directly killing them to reducing reproduction, growth, cellular function and overall species diversity. We analyzed relevant data in relation to the following health outcomes: mortality, abundance, biomass, behavior, reproduction, biochemical biomarkers, growth, richness and diversity, and structural changes. This resulted in an analysis of more than 2,800 separate “cases,” measured as a change in a specific health outcome after a specific organism’s exposure to a specific pesticide. We found negative effects in 71% of cases.

Our analysis showed that all classes of pesticides threaten soil invertebrates. The classes most often associated with harm (in more than 70% of cases reviewed) are organophosphate, neonicotinoid, pyrethroid and carbamate insecticides; amide/anilide herbicides; and benzimidazole and inorganic fungicides.

Scope of the Pesticide Problem

The United States uses more than 1 billion pounds of pesticides every year. As little as 0.1% of an applied pesticide interacts with its targeted weed or pest. The remainder contaminates the soil, air and water and can have significant impacts throughout the ecosystem. Pesticides can also linger in the soil for years or decades after they are applied, continuing to harm soil health.

Soil organisms encounter a cocktail of toxic chemicals. Research shows that mixtures of pesticide residues in the soil are the rule, not the exception, since farmers typically use multiple pesticides at once. For example, the U.S. Department of Agriculture estimates that Washington apples are treated with an average of 51 different pesticides in 6 to 17 applications per year. The continuous use of pesticides doesn’t give soil communities time to recover.

What’s more, the use of pesticide-coated seeds increases soil organisms’ exposure to toxic chemicals. Seeds treated with insecticides like neonicotinoids are set right into the soil, and most of the pesticide stays there.

Neonicotinoids are particularly harmful to insects. U.S. agriculture has become 48 times more toxic to insect life since we started using neonicotinoids in the 1990s.

While pesticide companies claim their products are needed to feed the world’s growing population, this study’s findings point in the opposite direction. The continued use of toxic chemicals to grow our food undermines the healthy soil ecosystems that sustainable food production depends on.

This research shatters pesticide companies’ claim that farmers can build “healthy soils for a better planet” using their products. Our study also shows that pesticide reduction must be a key part of combatting soil biodiversity loss and agriculture’s role in climate change.

Despite the known harm pesticides pose to soil life, the U.S. Environmental Protection Agency doesn’t require consideration of soil organisms in any pesticide risk analysis before approving them for use. To protect the long-term health of the soil that feeds us, the EPA must include assessing harm to soil invertebrates in the U.S. pesticide-regulation process.

We know farming practices like composting and cover cropping build healthy soil ecosystems and reduce the need for pesticides in the first place. Yet our farm policies continue to prop up a pesticide-intensive food system. Our results highlight the need for policies that support farmers adopting ecological farming methods that help biodiversity flourish in the soil and above ground.

MEDIA
Search our press releases to learn more about our work on soil health.