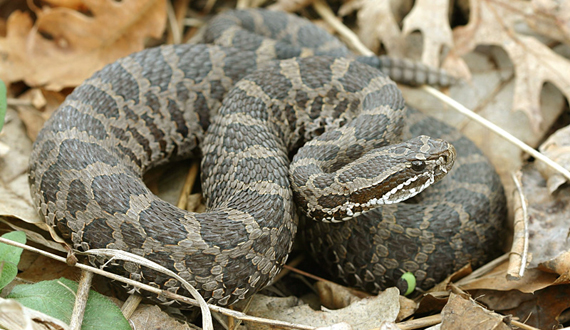 HABITAT: Massasaugas live in wet areas including wet prairies, marshes, and low areas along rivers and lakes. They often hibernate in crayfish burrows, but they may also be found under logs and tree roots or in small mammal burrows. Unlike other rattlesnakes, massasaugas hibernate alone.

RANGE: Eastern massasaugas live in an area that extends from western New York and southern Ontario to southern Iowa, as well as on a narrow band of land in northeastern Missouri. Historically, the snake's range covered this same area, but within this area the number of populations — and the number of snakes within populations — have steadily shrunk.

MIGRATION: A local migrant, the massasauga may travel 1.6 miles or more between winter and summer habitats.

BREEDING: Like all rattlesnakes, massasaugas bear live young — the young actually hatch from eggs while still in the female's body. Depending on the health of the individual, adult females may bear young every year or every other year. When food is especially scarce, they may only have young every three years.

FEEDING: Massasaugas eat small rodents like mice and voles but will sometimes eat frogs and other snakes. They can find their prey by sight, by feeling vibrations, by sensing heat given off by their prey, or by detecting chemicals given off by the animal.

THREATS: Habitat loss due to urban development and eradication by humans threatens the species.

POPULATION TREND: Massasaugas are in decline.