GIVE TODAY
The Virgin Islands tree boa hunts at night in the trees and sleeps during the day, finding refuge in rock or vegetation cavities, in termite nests, or under rocks and debris. 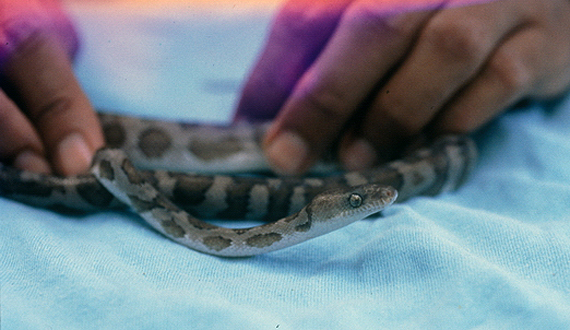 The Virgin Islands tree boa is a harmless snake that lives in the U.S. and British Virgin Islands and islands off Puerto Rico. Having existed there since the islands' formation some 20,000 years ago, the boa is one of the Virgin Islands' original inhabitants. This rare and beautiful snake, active primarily at night, is brown with blotched dark spots and easily blends with its surroundings in subtropical dry forests, where it forages for sleeping lizards. It prefers to stay sheltered, although, to the species' detriment, vegetation-clearance activities often force the snake into the open.