GIVE TODAY
With its iridescent and blue-black back, yellow and red patches, and three red stripes, the South Florida rainbow snake is colorful and beautiful. 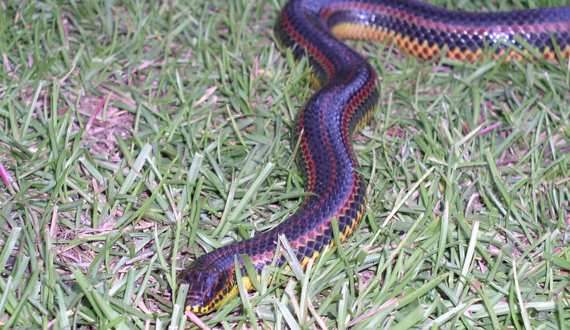 The South Florida rainbow snake resembles less a rainbow than a rainbow's shadow: With its iridescent, blue-black back, yellow and red patches and three red stripes, the snake is colorful and beautiful — but in a dark, mysterious way. This nocturnal reptile has mysterious habits, too, spending most of its time in South Florida waterways concealed behind aquatic vegetation. In fact, the snake is so secretive that Florida officials say it hasn't been collected since 1952. But several unconfirmed sightings have been reported since then, giving us reason to believe it may still exist — in which case it needs saving from development, dams, pollution and other threats.

Accordingly, the Center petitioned to protect the South Florida rainbow snake under the Endangered Species Act in 2010, along with 403 other imperiled Southeast freshwater species. But in response, the next year the federal government deemed the elusive snake extinct — without conducting the thorough survey needed to back up such a declaration about the cryptic creature.

Unconvinced of the snake's extinction beyond a reasonable doubt, in 2012 — after an especially tantalizing reported sighting — the Center for Biological Diversity joined the Center for Snake Conservation, Florida Fish and Wildlife Conservation Commission and U.S. Fish and Wildlife Service on an expedition in search of the eel-eating reptile. We didn't find the snake that time, but we did find perfect habitat for it in Fisheating Creek in Glades County, Florida, and got a reliable report of a new local snake sighting. We put up a $500 reward to anyone providing hard evidence of the animal's existence — and the snake search goes on.

Watch a video of our 2012 expedition in search of the South Florida rainbow snake.