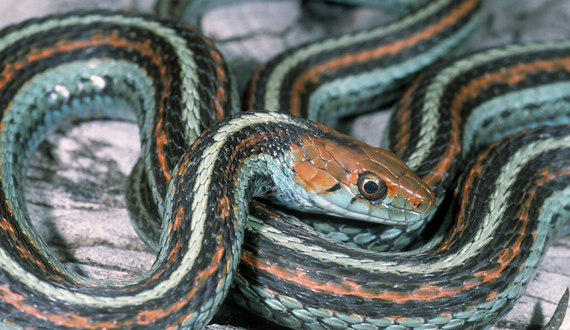 The San Francisco garter snake has been dubbed “the most beautiful serpent in North America,” and it's arguably one of the most endangered species, too. All known populations of this fantastically colored snake occur in scarce coastal and bayside wetlands in San Mateo County. The snake's preferred habitats have been hit hard by agricultural, residential, commercial, and even recreational development — so the Center is working to protect and restore habitat for this rare and unique turquoise serpent.

We've built a campaign to re-establish a unique backbarrier lagoon habitat at Sharp Park in Pacifica, California — public land that's a significant habitat for the garter snake as well as its preferred prey, the California red-legged frog. In 2008, we filed a notice of intent to sue the city of San Francisco for illegally killing and harming San Francisco garter snakes at Sharp Park Golf Course. Along with adjacent Mori Point, which lies within the Golden Gate National Recreation Area, Sharp Park provides one of the last great restoration opportunities on California's central coast.

Numerous toxic pesticides known or suspected to harm garter snakes are used in San Mateo County. The Center is challenging the Environmental Protection Agency's registration and authorization for use of 44 toxic pesticides in and upstream of habitats for San Francisco Bay Area endangered species, including the San Francisco garter snake. We continue to monitor and oppose harmful chemical pesticide use in California through our Pesticides Reduction Campaign .