GIVE TODAY
The Coachella Valley fringe-toed lizard's nose is equipped with a structure that allows it to continue breathing underground without inhaling sand. 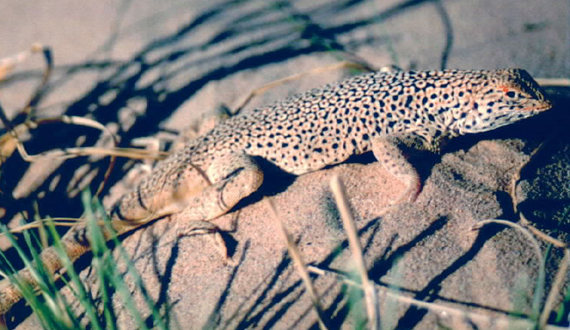 
DESCRIPTION: The Coachella Valley fringe-toed lizard is six to nine inches long with granular dorsal scales; dorsal ground color is whitish-buff with black, ring-like markings; ventral color is white with black bars on the underside of the tail. Reddish-orange breeding coloration is present from May to September. Typically, there are 23 to 32 fringes (scales) on the posterior edge of the fourth toe of the hind foot. Sexually mature males are larger than mature females; males always have two enlarged postanal scales, which are lacking in 97 percent of females.

RANGE: The lizard is restricted to the Coachella Valley in Riverside County, California, and typically found at elevations from near sea level to about 1,600 feet. Historically, the lizard's range encompassed nearly 171,000 acres of sandy plains, sand hummocks, and mesquite dunes .

MIGRATION: The species is not believed to migrate.

BREEDING: Breeding takes place between April and August; males have a significantly larger home-range size than do females, which they use to find females during breeding season. Females lay between one and six eggs, with hatchlings appearing from late June to early September. Lizards do not care for their young.

LIFE CYCLE: It is believed that eggs hatch between 28 and 38ºC in egg burrows that are roughly 22 centimeters deep, beyond the root zone of perennial plants. The lizards hibernate during winter and are most active during daylight hours; when summer temperatures reach lethal limits, they escape the heat by "swimming" or burrowing beneath the sand. Activities tend to be restricted to the early morning and late afternoon hours.

FEEDING: In May, flowers and plant-dwelling arthropods are primary foods. After the breeding season is over (in summer, a period of low food abundance), the diet broadens to include ground-dwelling arthropods and foliage; the lizard's own hatchlings are also occasionally eaten.

POPULATION TREND: By the mid-1970s, more than 50 percent of the Coachella Valley fringe-toed lizard's historical habitat had been lost; by the 1990s, approximately 75 percent of habitat had been lost. The U.S. Fish and Wildlife Service defined the population as declining in 1990, and though the California Department of Fish and Game deemed the population “stable or at least not substantially declining” in 1999, the long-term population trend, according to NatureServe, is one of substantial decline.