GIVE TODAY
Females of this species can be three times larger than males. 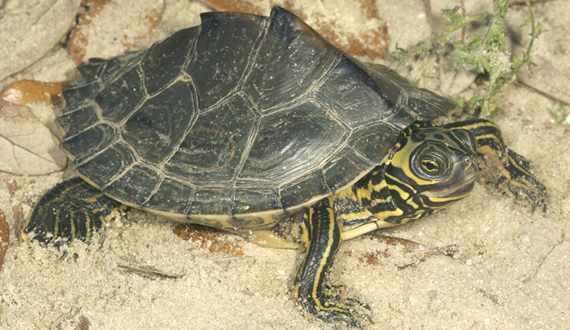 The Barbour's map turtle is one of the rarest of map turtles, found only in the Apalachicola River system and nearby systems of Florida, Georgia and Alabama in the southeastern United States, where its populations are in steep decline. Water pollution caused by toxic industrial discharges into some of the turtle's home waterways is causing extensive deformities, shell ulcerations and widespread mortality in the mollusks that the turtles eat. In addition, this beautiful turtle — with its spiked shell and intricate pattern of yellow markings — is prized for the pet trade and suffers from overcollection.

The Center is working to end unsustainable international trade in Barbour's map turtles. In 2011 we filed a petition to list all the map turtles, as well as several other freshwater turtle species, under Appendix II of the Convention on International Trade in Endangered Species (CITES). In response to that petition, the U.S. Fish and Wildlife Service announced in April 2011 that it may propose 17 species of U.S. freshwater turtles — including the Barbour's map turtle — for CITES protection. And following our 757 species settlement in 2011, in April 2013 the Service agreed to submit to the Federal Register 12-month findings on our petition to list the Barbour's map turtle by September 30, 2017.

The Barbour's turtle is state-listed as rare or threatened across its range in Georgia, Florida and Alabama, but it receives no protection under the federal Endangered Species Act. That's why the Center filed a 2010 petition to list the Barbour's map turtle under the Act, along with more than 400 other freshwater species in the Southeast. In 2011 the Fish and Wildlife Service found the turtle may warrant Endangered Species Act protection but failed to make a final decision on listing as is required by law. So in September 2012 the Center launched a lawsuit seeking to speed federal protections for turtle, before it's too late.