GIVE TODAY
Alameda whipsnakes are good climbers that can escape into scrub and trees. 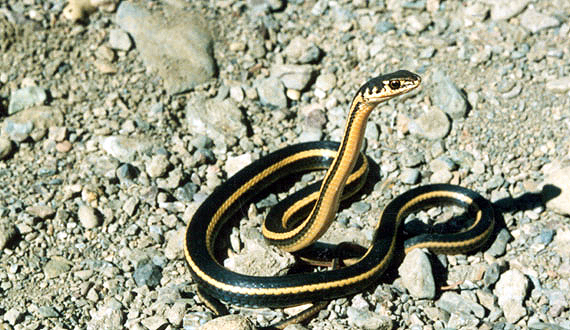 DESCRIPTION: The Alameda whipsnake is a slender snake that generally grows to be three or four feet in length, with a narrow neck, broad head, and large eyes. Its body is sooty black or dark brown above with a distinctive yellow-orange stripe down each side. The coloring on the underside of the whipsnake starts as rufous orange in front, transitions to a cream color in the middle, and ends with a sublime salmon pink in the tail.

HABITAT: The whipsnake is primarily found in northern coastal scrub and chaparral habitats in Alameda and Contra Costa counties. It also may occur in grasslands, open woodlands, rocky slopes, and along open streams and arroyos near scrub and chaparral. Whipsnakes seek shelter in rock piles, outcrops, or small mammal burrows.

RANGE: The Alameda whipsnake is only found in suitable habitat in Alameda, Contra Costa, western San Joaquin and northern Santa Clara counties in California. It currently remains in five isolated populations within a fragmented regional metapopulation, with only two or three potential corridors for gene flow between them.

MIGRATION: Alameda whipsnakes do not migrate.

BREEDING: Whipsnake courtship and mating takes place from late March through mid-June. Males roam around looking for love while females remain near their hibernation site, where mating occurs. Egg-laying sites are suspected to be in grasslands with scattered shrub habitat. It takes the female roughly two months to lay eggs after mating. The average clutch size is seven eggs.

LIFE CYCLE: Eggs incubate for three months before hatching and young appear in the late summer and fall. Young whipsnakes take two to three years to reach maturity. Whipsnakes generally retreat into a hibernation site in November and emerge in March. Adults can grow to almost five feet, but three- to four-foot lengths are more common. Whipsnakes may live for eight years or longer.

FEEDING: The Alameda whipsnake dines primarily on lizards and will also eat frogs, small mammals, nesting birds, and other snakes, including rattlesnakes. Prey is seized with great speed, pinioned under loops of the body, and engulfed without constriction.

THREATS: The species is threatened by habitat loss, degradation, and fragmentation due to urban development, road construction, livestock grazing, and fire suppression.

POPULATION TREND: The Alameda whipsnake population has been fragmented into five mostly isolated subpopulations whose numbers are unknown, but which are certain to be rapidly declining as suitable habitat is lost to urban development. Whipsnakes were eliminated from 35 of 60 known historical localities by 1992.