GIVE TODAY
This shy, perennial herb is visible aboveground only in the spring of good rainfall years. 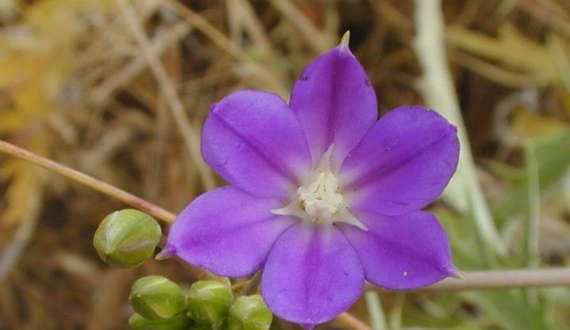 The thread-leaved brodiaea is nothing if not shy, spending most of its life nestled in a cocoon of warm earth. Its beauty when it blooms, however, is worth the wait: For only a few months each year, it rises from its hiding place and splashes the California landscape with sprays of pale violet flowers. Yet even the earth can't shelter this lovely plant from the danger it now faces. As California's cities continue to grow, this plant's traditional range is paved over, and the reclusive thread-leaved brodiaea — which occurs nowhere else in the world — needs our protection more than ever.

Since 1998, when the U.S. Fish and Wildlife Service declared the thread-leaved brodiaea a threatened species — but refused to grant it critical habitat — the Center has been working to protect this rare plant from the increasing danger it now faces.

We first contested the thread-leaved brodiaea's lack of federally protected habitat in 2001. In 2005, the Fish and Wildlife Service finally announced it would consider protecting 4,690 acres for the plant, spread across 10 sites in Southern California. But later that year, the Service announced that it would grant the plant just 597 protected acres in two sites, only 13 percent of the original lands considered. In late 2007, the Center filed suit against the Bush administration for going against science in its failure to protect enough habitat for the thread-leaved brodiaea, and in 2011 the Service protected 2,947 acres — a vast improvement on its previous designation but not enough for the plant's recovery. We'll continue our work to help this rare and beautiful species until it gets the protections it deserves.

MEDIA
Press releases
Search our newsroom for the thread-leaved brodiaea