GIVE TODAY
The spreading navarretia is primarily associated with vernal pools, alkali playas and alkali sinks. 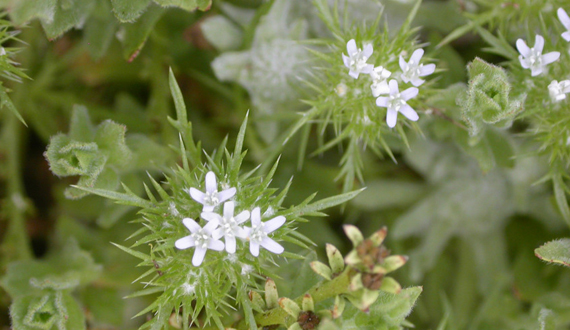 The spreading navarretia prefers to stick close to the earth, growing out more than up as its spreads its pointy leaves and little, star-like flowers over the ground. This plant is also pretty picky about where it sinks its roots: It grows only in special clay soils that hold water well, and it has a particular liking for areas that harbor vernal pools — temporary collections of standing water — in the spring, when it blooms. But as agriculture, wetland alterations and development take over California, the spreading navarretia is experiencing a serious downgrade in living conditions. More and more, these elegant plants are clinging to life by resorting to human-dug ditches for homes.

The Center first took action for the spreading navarretia back in 2001 when we sued the U.S. Fish and Wildlife Service to force critical habitat designation for the plant. We won our case the next year, but the Service ended up protecting only 652 acres of land for the plant — hardly enough for long-term survival, much less recovery. So we included the plant in our Litigating Political Corruption Campaign, which we kicked off in August 2007 with a notice of intent to sue the administration over politically tainted decisions affecting 55 endangered species and their habitat. We followed up with a lawsuit for the plant in December 2007, and six months later the Fish and Wildlife Service agreed to consider granting it more protections.

Unfortunately, the Service ended up protecting just 6,720 acres — only 35 percent of the 19,399 acres the agency itself identified as “essential for the conservation” of the species.

Despite its name, the spreading navarretia is far from widespread. Though its overall range covers an area from Southern California to northern Mexico, individual populations are small and localized. And while it's been listed under the Endangered Species Act for 20 years, thanks to the administration's tricks, the plant still has a laughably small area of protected habitat on the edges of its range.

MEDIA
Press releases
Search our newsroom for the spreading navarretia