GIVE TODAY
This plant is covered with hairs called "trichomes" that come in handy in the meadowfoam's southwestern Oregon home, helping reflect the sun's rays and limiting water loss. 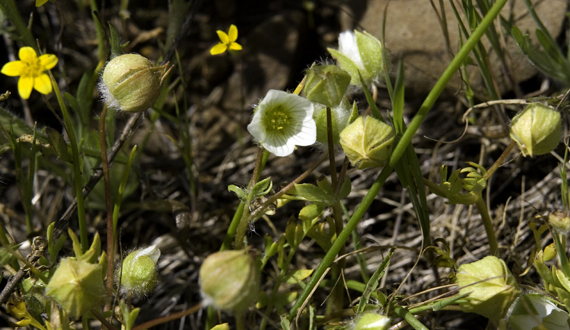 The large-flowered woolly meadowfoam is indeed a “woolly” plant — its stems and leaves are sparsely covered with short, fuzzy plant-fur, and its flowers, especially the sepals, sport a dense coat of hairs. These hairs, called “trichomes,” come in handy in the meadowfoam's southwestern Oregon home, helping reflect the sun's rays and limiting water loss during the plant's short spring growing period in its vernal pool surroundings. But trichomes can't limit the meadowfoam's dramatic loss of habitat: Jackson County's human population explosion has given this comically named plant a less-than-amusing prognosis.

In 2002, 10 years after the Center and allies sued the U.S. Fish and Wildlife Service for failing to list about 500 imperiled species — including the large-flowered woolly meadowfoam — the Service declared the plant to be endangered under the Endangered Species Act. But at the time of listing, the agency failed to designate critical habitat for the meadowfoam, claiming that “funding restraints” made it impossible. Finally, as a result of a Center lawsuit, in 2010 the agency granted the plant 5,840 acres of critical habitat.

While the largest meadowfoam populations are located within Jackson County's protected Agate Desert Preserve, alteration of nearby land disrupts the Preserve's hydrologic processes and degrades the habitat it provides; in addition, lack of protective fencing fails to keep out off-road vehicles and earth-moving equipment. The meadowfoam's vernal pool habitat, formerly widespread south of the Rogue River, has now been almost completely eliminated — and none of what's left is undisturbed.