GIVE TODAY
Munz's onion is well adapted to periodic drought and can survive dry years underground as a bulb. 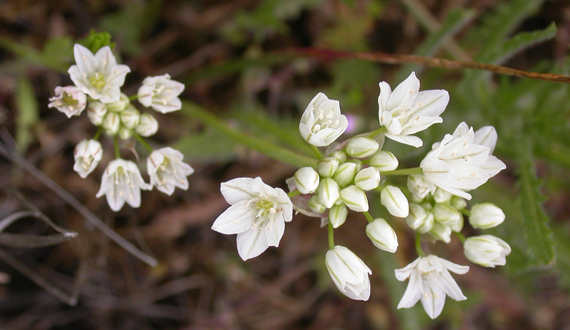 Living aboveground only during the spring, the hardy Munz's onion spends most of its life belowground and lives in dry, cracking clay soils during Southern California's hot summer months. Yet there's one thing this persistent herb can't adapt to: the continual loss of its habitat to development and mining. Now completely restricted to Riverside County, Munz's onion is left with as little as 90 percent of the area it could be calling home.

Since Munz's onion was put on the Endangered Species list in 1998, the Center has fought to win it the habitat protections it needs. It's been an uphill trek; in response to a Center lawsuit, in 2004 the U.S. Fish and Wildlife Service proposed to set aside just 227 acres for the plant, and in its final rule a year later, the Service designated even less than it had proposed — only 176 acres, a 25-percent slash. Most of the habitat selected for protection lies in the Elsinore Mountains and was already under federal protection before the final rule; worse, the most threatened populations of Munz's onion were left on unprotected ground. To battle the onion's insufficient habitat designation and wrongful decisions threatening 54 other imperiled species, in August 2007 the Center filed a notice of intent to sue the Bush administration. About a year later, took the administration to court in defense of the Munz's onion and five other species. In 2016, we went back to court in defense of Munz's onion, filing a lawsuit challenging Riverside County's approval of a plan to trade away more than 40 acres of important habitat for endangered plants, including Munz's onion, to a private developer.

MEDIA
Press releases
Search our newsroom for the Munz's onion