GIVE TODAY
This plant is confined to extremely limited areas in Clark and Lincoln counties, Nevada. 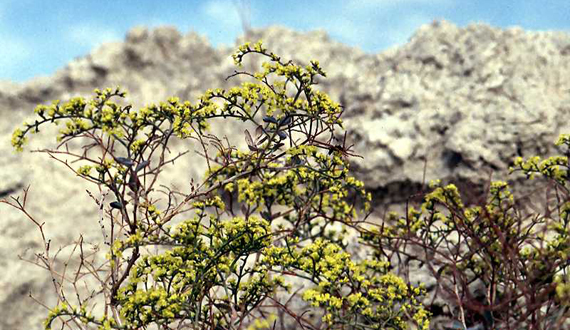 The Las Vegas Buckwheat is a bona fide Nevada native confined to gypsum-rich soils in central and eastern Clark County and southern Lincoln County, Nevada. Unfortunately, its habitat is shared by one of the fastest-growing metropolitan areas in the United States — Las Vegas. This plant is no match for the housing and commercial sprawl or unmanaged off-road vehicle use associated with the explosive growth. To date, federal and state authorities charged with protecting species have been more than willing to gamble away the chance of this plant surviving.

In a rapidly growing and transient city like Las Vegas, few members of the general public even know the Las Vegas buckwheat exists. The Center's federal petition for listing the plant under the Endangered Species Act has helped call the public's eye to the plant's plight and profile — in fact, the Las Vegas Sun carried a feature article on its front page in 2008 describing the buckwheat's plight. In the same year, the Nevada state forester announced proposed regulations to protect the plant under state law.

The only hope for the survival of the Las Vegas buckwheat is for its precious few remaining acres of habitat to be set aside and preserved. Unfortunately for the plant, a major portion of its remaining habitat is in the upper Las Vegas Wash, an area managed by the Bureau of Land Management and currently being studied for possible sale to private developers. Fortunately, in 2011 the Center reached a landmark agreement with the Fish and Wildlife Service compelling the agency to move forward in the protection process for 757 species, including the Las Vegas buckwheat.