GIVE TODAY
The Lane Mountain milk vetch's hearty taproot allows it to survive without any living aboveground presence for several years. 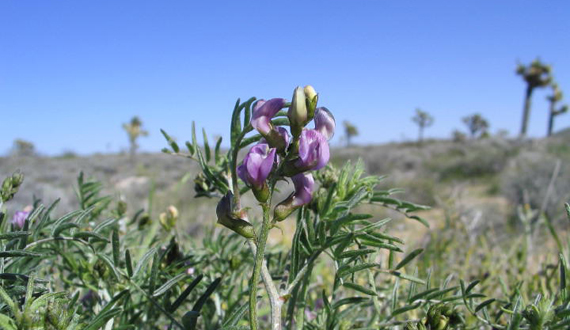 The Lane Mountain milk vetch is no stranger to adversity, with its remarkable ability to survive for years underground and subsist on what little moisture its taproot can soak up. When this small, desert-dwelling plant does have an aboveground presence, it can be found growing intertwined among the branches of other shrubs for support. The Lane Mountain milk vetch is likewise entangled with the U.S. Army, which is determined to trample this miniature flowering herb and its habitat.

The Center filed a lawsuit that successfully forced the U.S. Fish and Wildlife Service to protect the Lane Mountain milk vetch under the Endangered Species Act. All known populations of the milk vetch are found on federal lands managed by the Bureau of Land Management or Department of Defense, and military maneuvers have a significant impact on its survival, so we anticipated an uphill battle to keep vital milk vetch habitat intact. After dragging its feet for several years, the Service eventually proposed nearly 30,000 acres as critical habitat.

But in a sudden about-face, the Service's final decision excluded the entire proposed area from protection — so we sued the agency, and in 2011 it designated 14,069 protected acres.