GIVE TODAY
This perennial herb can only be found in a tiny section of the northern Mojave Desert between Utah and Arizona. 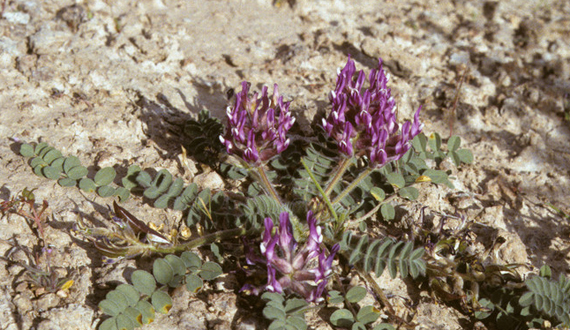 Holmgren's milk vetch is so finely adapted to its arid northern Mojave Desert environment that it's often the only plant found alive atop special soils strewn with small stones and gravel deposits. Where other desert plants fail to grow, the Holmgren's milk-vetch thrives. But with persistent encroachment by urban development, off-road vehicles, grazing, and invasive plant species, Holmgren's becomes less and less able to eke out a living among the stones and gravels.

In 1999, the Center and our allies petitioned the U.S. Fish and Wildlife Service to list both the Holmgren's milk vetch and the Shivwitz milk vetch as endangered species. As a result of Center involvement, both plants were listed as endangered in 2001, but critical habitat designation was indefinitely delayed. The Center stayed with the case, and in 2004 informed the U.S. Fish and Wildlife service of its intent to sue the agency for its failure to designate critical habitat and develop a recovery plan for the milk vetches.

In 2006, after much involvement from the Center and allies, Fish and Wildlife finally designated critical habitat and created a recovery plan for the Holmgren's and Shivwitz milk vetches. And in 2007, the agency drafted a five-year review for both species.