GIVE TODAY
A bison's hump, composed of muscle supported by vertebrae, gives the bison enough strength to use its head as a snowplow. 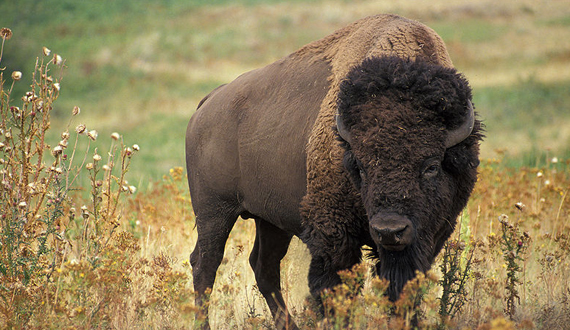 RANGE: Bison once roamed from Florida through the eastern deciduous forests and Great Plains to the Cascade Mountains in Washington, from Alberta, Canada to Mexico — in other words, nearly the whole United States.

MIGRATION: Bison migrate with seasons according to the availability of grasses. Groups of bison generally circulate in a home range of about 12 to 39 square miles

BREEDING: Bison breed in August and September, during which dominant males maintain a small “harem “of  females for mating. A female's gestation period lasts 285 to 300 days, after which she gives birth to one calf (or, rarely, two), which is weaned after five or six months.

LIFE CYCLE: Bison reach sexual maturity at two or three years of age. They live up to 25 years.

FEEDING: Plains bison graze on grasses and sedges of the North American prairies. Their daily schedule involves two-hour periods of grazing, resting and cud-chewing, after which a group moves to a new grazing area.

POPULATION TREND: The species has gone from numbering in the millions to only about 20,500 individuals in 62 wild conservation herds. More than three-quarters of these herds contain too few individuals to be considered “minimally viable” by scientists. Only one herd has more than 2,000 bison, and only 14 have more than 400 bison.