GIVE TODAY
Tree voles are one of only animals that can subsist on conifer needles, which have resin ducts that contain unpalatable terpenoids. Tree voles cleverly remove these resin ducts from the needles before eating them. 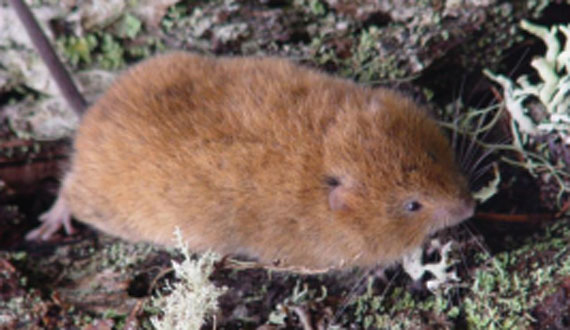 DESCRIPTION: North Coast red tree voles are small, reddish-brown rodents with thick fur. They weigh approximately one ounce and measure six to eight inches in length. Long, black tails account for more than half of their total length. Their sharp, curved claws are especially adapted for climbing.

HABITAT: This population of red tree voles is primarily found in the canopies of Sitka spruce and western hemlock. The red tree voles that occur away from coastal areas will also inhabit Douglas fir. Tree voles are an old-growth-dependent species, though they also live in structurally complex young forests with plenty of tree limbs and deformed treetops.

RANGE: The North Coast population of red tree voles is restricted to the high-moisture, coniferous forests of northern coastal Oregon in Clatsop, Tillamook and Lincoln counties.

MIGRATION: North Coast red tree voles have very limited dispersal and will each use between one and seven nest trees. They sometimes move to neighboring trees to forage.

BREEDING: The primary breeding season for this population of red tree voles is February to September. Following a month-long gestation period, mothers give birth to between one and four young. They wean their young more slowly than other voles, for anywhere from 30 to 40 days. This longer development period is thought to be an adaptation to a low-energy diet and to adjust to life in the trees, where considerable learning is required before the young voles become proficient at climbing and harvesting food.

LIFE CYCLE: Few tree voles live for longer than one to two years.

FEEDING: North Coast red tree voles' diet consists almost entirely of conifer needles from western hemlock, Sitka spruce and Douglas fir. Tree voles forage primarily at night. They chew off the tips of branches, drag the clippings back to their nests and store them for consumption throughout the day.

THREATS: The North Coast red tree vole is isolated throughout most of its range as a result of extensive logging and habitat fragmentation. Additional threats include urbanization, wildfires, road construction, pollution, invasion of exotic species, global warming and disease.

POPULATION TREND: Dangerously low population levels exist throughout a large extent of this tree vole's range. Recent surveys have failed to locate any North Coast red tree voles in areas where they were once common. With much of the species' preferred habitat lost or fragmented, this tree vole is in critical need of protection.