GIVE TODAY
Spotted seals are serial monogamists, forming a new family group each year consisting of a male, female and a pup. This is a unique breeding system among ice seal species. 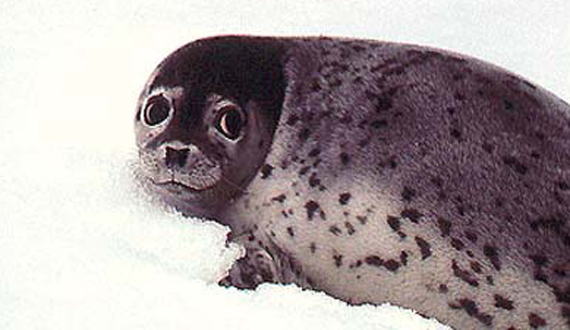 DESCRIPTION: The spotted seal is a medium-sized seal distinguished by its vivid markings of brownish to black irregularly shaped spots, sometimes encircled by a faint ring, scattered over a lighter base coat. Adults average 5.2 feet in length and range from 143 to 253 pounds in weight.

HABITAT: The spotted seal occurs in the seasonally ice-covered subarctic and marginal seas adjacent to the North Pacific Ocean. These seals rely on the dispersed floes of the sea-ice front and fringe during winter and spring as a platform for birthing and nursing pups, as well as for molting and resting.

RANGE: The spotted seal is found primarily along the continental shelf of the Beaufort, Chukchi, Bering, and Okhotsk seas and south to the northern Yellow Sea and western Sea of Japan.

BREEDING: Spotted seals are annually monogamous. Males and females form pairs 10 days before the female gives birth, and pairs stay together until mating occurs after the pup is weaned. Females in the Bering and Okhotsk seas give birth in April and nurse their pups on the sea ice for three to six weeks.

LIFE CYCLE: Females reach sexual maturity at three to six years, males at five to six. The maximum lifespan of spotted seals is at least 35 years.

FEEDING: Spotted seals' diet is very varied, but principle foods for adults are schooling fishes, crustaceans, and cephalopods. Pups feed mainly on invertebrates and small fish. The spotted seal diet varies not only with age, but also with region and season.

THREATS: The primary threat to the spotted seal is global warming, which melts the sea ice it depends on for giving birth, nursing pups, resting and molting, and which depletes its prey through ocean acidification. Global warming exacerbates other threats to the spotted seal, including oil and gas development, shipping activities, fishery bycatch mortality, oil spills, ocean noise pollution, hunting, ocean contamination, and human disturbance.

POPULATION TREND: Population trends for spotted seals over recent decades are difficult to assess since reliable populations estimates are not available for most populations. The Bering-Chukchi Sea spotted seal population is thought to have declined since the early 1980s, likely due to unfavorable sea-ice conditions and altered food web dynamics.