GIVE TODAY
Ringed seals build snow lairs over breathing holes in the ice to provide shelter for their pups from freezing temperatures and predators. 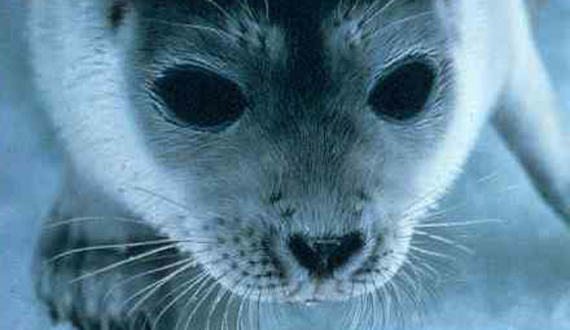 HABITAT: Ringed seals depend on sea ice to give birth, nurse pups, and haul out to complete the annual molt of their fur. Sea ice and snow also afford protection from polar bear and Arctic fox predators and provide insulation and shelter from extreme Arctic temperatures.

MIGRATION: In winter to early summer, adult ringed seals occupy breeding areas primarily on stable landfast ice over the continental shelf along Arctic coasts, bays and inter-island channels. Younger seals usually occupy the outer, less-stable ice areas. As the sea ice retreats in late spring and summer, ringed seals in many regions move northward. During summer and fall when the sea-ice extent is at a minimum and has disappeared from many regions, ringed seals of all ages occur along the edge of the permanent pack ice, on near-shore ice remnants, or in open water.

BREEDING: Females give birth to a single pup in a snow lair on the landfast ice or pack ice during March and April and nurse their pups for five to seven weeks. Mating generally occurs in the water one month after females have given birth. Gestation lasts until the next spring, when another pup is born.

FEEDING: Ringed seals primarily eat fishes of the cod family (especially Arctic and saffron cod), krill, shrimp and other small crustaceans. The Arctic cod is the dominant prey in most localities.

THREATS: The primary threat to the ringed seal is global warming, which melts the sea ice it depends on for giving birth, nursing pups, resting and molting, and which depletes its prey through ocean acidification. Global warming exacerbates other threats to the ringed seal, including oil and gas development, shipping activities, fishery bycatch mortality, oil spills, ocean noise pollution, hunting, ocean contamination and human disturbance.

POPULATION TREND: Ringed seals are the most abundant Arctic seal and are thought to number more than one million individuals. Population trends for ringed seals are difficult to detect because there are few repeated or reliable abundance estimates. However, population declines have occurred in populations for which trends have been analyzed. Ringed seals in the Canadian Arctic are suffering reproductive failures, higher pup mortality, and decreased body condition due to earlier snow melt and breakup of sea ice.