GIVE TODAY
Conservationist John Muir devoted an entire chapter of his 1984 book Mountains of California to mountain sheep. 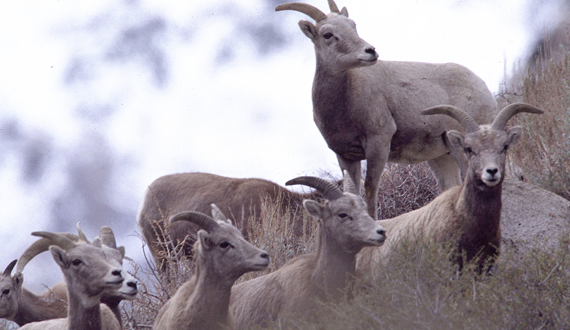 Sierra Nevada bighorn sheep learn to leap from crag to crag in early lambhood, developing quickly into keen-eyed, strong-limbed and extremely agile creatures, always on the move to escape mountain lions and find food on steep, rocky slopes. Although they once populated the High Sierra by the thousands, European settlement of the West brought domestic sheep and other threats to the bighorns' habitat, and the species is thought to have been imperiled since the Gold Rush.

The Sierra Nevada bighorn sheep was the first species to be listed under the Endangered Species Act in the 21st century, and in fact, listing should have happened much sooner. The species began its decline back in the mid-1800s, and by 1995 the total population numbered few more than 100 individuals. Primarily because of diseases introduced by exotic, domestic sheep grazing in their habitat, Sierra Nevada bighorns experienced a series of dramatic declines in the latter half of the 20th century.

Thanks to Endangered Species Act listing, the bighorn has come back from the brink of extinction, and its population is slowly on the rise. Several  subpopulations were reintroduced to areas where the sheep had been lost, and some natural recolonization has occurred, although the species is still struggling to maintain viable populations in light of poor reproductive success in many of the herds. Although the Act requires critical habitat to be designated upon a species' listing, the U.S. Fish and Wildlife Service was slow to put federal habitat protections in place until the Center sued the Service in 2005 to force critical habitat designation.

Finally, in 2008 — the same year in which a bighorn recovery plan was finally published — the Service designated a total of more than 400,000 acres of critical habitat for this iconic mountain dweller. Still the Forest Service and Bureau of Land Management failed to adequately protect the bighorn from potentially dangerous disease transmission — so the Center warned of another suit in 2009.  Since that time the Forest Service and BLM have acted to reduce the impact of domestic sheep grazing by restricting or eliminating use of the highest-risk allotments based on a peer-reviewed scientific risk assessment and other relevant information.

Unfortunately domestic sheep grazing still continues in some high-risk areas on private lands and lands owned by Mono County at Conway and Mattly ranches. The Center is continuing to advocate for ending domestic sheep grazing in areas that pose a risk of disease transmission to this endangered bighorn population.