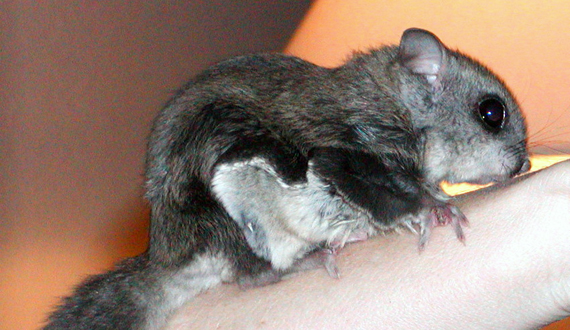 Gracefully gliding between trees at night in search of a feast of truffles, the San Bernardino flying squirrel is one of the most distinctive nocturnal residents of Southern California's high-elevation conifer forests. Like spotted owls, flying squirrels thrive in mature forests with big trees, large snags and plenty of downed logs that foster the growth of the truffle fungi they eat. But this squirrel is in danger of being lost forever from the landscape. The San Bernardino flying squirrel is thought to have disappeared from the San Jacinto Mountains in the past few decades, and the remaining population — which is restricted to the upper-elevation forests of the San Bernardino Mountains — faces numerous threats. With climate change, the squirrels' forest habitat is moving upslope as temperatures warm, and drought threatens its truffle fungus food, which depends on wet, cool conditions. Forest-management practices that remove canopy cover, snags and downed logs are degrading the squirrel's habitat, while ever-increasing urban development is encroaching on its mountain home.

To save the San Bernardino flying squirrel from climate change and the other threats to its survival, in 2010 the Center petitioned the U.S. Fish and Wildlife Service to list it as threatened under the Endangered Species Act, as well as to designate critical habitat. The next year, we reached a historic agreement with the Service compelling it to make an initial listing decision for the squirrel by 2012 — as well as move forward on protection decisions for 756 other rare species. In January 2012, the Service issued an initial positive decision to protect the unique mammal due to threats from climate change and habitat destruction.