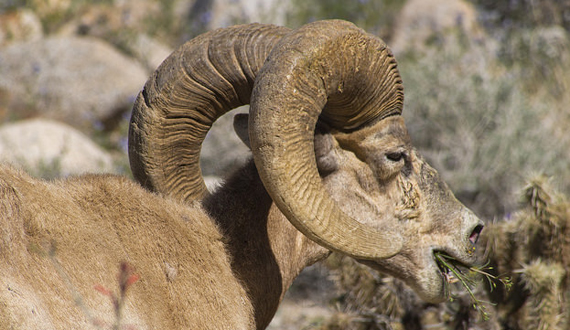 Peninsular bighorn sheep can get water from cacti, splitting the spiny barrel cactus with their horns and eating its watery insides. But thanks to sprawl and agribusiness, both sheep and succulent are increasingly rare: Up to 2 million bighorns roamed North America at the turn of the 20th century, but now only 70,000 remain. Peninsular bighorns, a so-called “distinct population segment” of these, number only in the hundreds. Still, their population has grown since they were federally protected, and thanks to the Center, they currently lay claim to nearly 850,000 acres of critical habitat. In 2007, we scored a big victory for part of that habitat when we won an injunction preventing development-associated grading in California's Chino Canyon.

Unfortunately, the Peninsular bighorn's critical habitat is in jeopardy. Responding to development pressure and a 2005 tribal lawsuit, the U.S. Fish and Wildlife Service proposed to dramatically reduce the area of land set aside for bighorn recovery, and its 2009 critical habitat proposal axed the original area by 55 percent — so the Center and four allies sued in October 2009.

The Center won't let this bighorn perish. We joined the Sierra Club in suing the city of Palm Desert and California Fish and Game Department over a housing project that would affect the Bighorn Institute, a federally recognized recovery center for the sheep. In 2000, we won protections for the bighorn and more than 50 other endangered species in Southern California's national forests; in 2001, we helped end off-road vehicle use of Dunn Road, illegally built in bighorn habitat — and we later challenged a plan to allow commercial vehicles on that road. We also advocate for protection of Peninsular bighorn in the central and southern parts of their range, including challenging off-road vehicle use in the Desert Cahuilla/Truckhaven area and fighting the expansion of a large gypsum mine, both in critical sheep habitat. We're working to curb off-road vehicle impacts in the Yuha Desert and other border areas that provide a link to bighorns in Mexico.