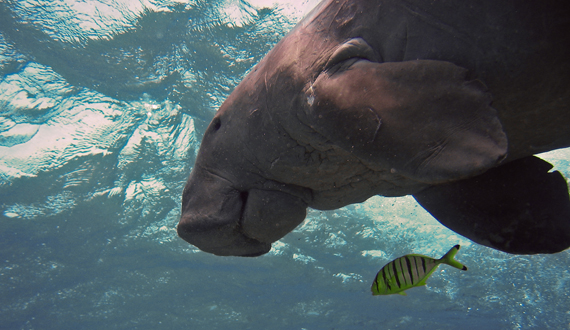 September 25, 2003 – The Center led a coalition of Japanese and American environmental groups in filing a lawsuit against the U.S. Department of Defense to halt American airbase construction in Henoko Bay.

2004 – The Center helped organize a resolution of 889 of the world's leading coral-reef experts urging the governments of Japan and the United States to abandon their offshore airbase plans. The Center was also instrumental in leading numerous international conservation groups to urge President Bush and Prime Minister Junichiro Koizumi to cancel airbase construction.

2005 – A federal judge ruled that the lawsuit over the airbase could proceed under the National Historic Preservation Act.

January 24, 2008 – A federal judge concluded a lawsuit against the U.S. Department of Defense, brought by the Center and a coalition of Japanese and American environmental groups, by ruling that the agency's construction of a new airbase in Henoko Bay — the feeding grounds of the dugong — was in violation of the U.S. National Historic Preservation Act. The judge ruled that the agency must consider impacts of the new airbase on the Okinawa dugong to prevent or mitigate harm.

December 1, 2009 – After the Obama administration announced the possibility of expanding the existing airbase in near Henoko, Center Oceans Director Miyoko Sakashita gave a presentation to the U.S. Marine Mammal Commission on the danger that project would pose to the dugong.

December 3, 2009 – The Center delivered a letter signed by numerous conservation, animal-protection, and peace and justice groups — together representing more than 10 million Americans — urging the White House and State Department to cancel plans to expand the airbase in Okinawa dugong habitat.

May 14, 2010 – A letter demanding the immediate closure of the base and the cancellation of plans to relocate it to Henoko Bay, Okinawa, was delivered to President Obama and Japanese Prime Minister Yukio Hatoyama — signed by the Center and more than 500 other groups.

July 31, 2014 – American and Japanese conservation groups, including the Center, asked a U.S. federal court to halt construction of a U.S. military airstrip in Okinawa that would be part of the controversial airbase. Preliminary construction on the base had begun earlier in the year.

December 12, 2014 – The Center and allies argued our case in U.S. federal court to halt construction of the U.S. military airstrip in Okinawa in the first hearing in a historic lawsuit brought by American and Japanese conservation groups under a provision of the National Historic Preservation Act, which requires the United States to avoid or mitigate any harm to places or things of cultural significance to another country.

May 26, 2016 – During President Obama’s visit to Japan for the G-7 summit, the Center for Biological Diversity called on him to abandon his controversial plan to build a large new military base in biologically rich and sensitive Henoko and Oura Bay, home to the dugong.

Early 2017 – Despite opposition from the Center and many other groups and individuals, preliminary construction on the military base began.

March 15, 2017 – The 9th Circuit Court of Appeals heard arguments in our lawsuit seeking to compel the U.S. government to disclose and consider the impacts of its proposed military base in Okinawa, Japan, on the critically endangered Okinawa dugong.

August 21, 2017 – The 9th Circuit U.S. Court of Appeals affirmed the right of American and Japanese conservation groups (including the Center) as well as Okinawan citizens to sue to compel the U.S. military to fully consider the impacts of its new U.S. military base in Okinawa, Japan, on the endangered Okinawa dugong's last remaining habitat. Preliminary construction on the base began earlier this year.