GIVE TODAY
Savannah elephants are responsible for the maintenance of open areas on the savannah landscape to the extent that their presence increases the diversity and abundance of other grazing herbivores. 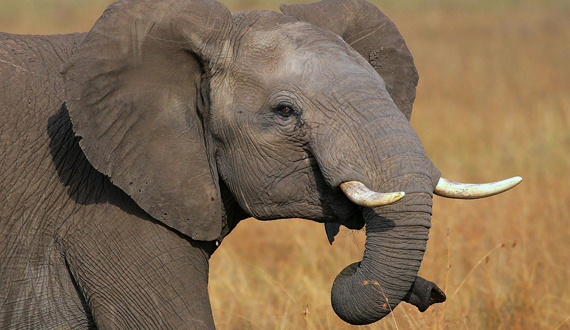 DESCRIPTION: Savannah elephants are the larger of the two African elephant species. They also have thicker, more curved tusks, more triangulated ears, and differently shaped skulls. Both elephant species exhibit sexual dimorphism, though, where males are larger than females, with wider-set tusks, more rounded foreheads and less curvature in their spines.

BREEDING: The breeding strategies for forest and savannah elephants are assumed to be mostly the same. Reproductive rates for both species are considered one of the slowest and most energy-intensive. In optimal conditions, elephants may reproduce at a rate of 6 percent. Elephants have the longest gestation period of any animal at 22 months, and twinning is rare, though it does happen. Elephants do not reach sexual maturity until they are between 14 and 17 years old, most males, however, are mostly unsuccessful at mating until they are much older, and females may only conceive every three to nine years.

LIFE CYCLE: Savannah elephants may live to be up to 70 years old.

FEEDING: Savannah elephants are generalists that feed on trees, shrubs, grasses, herbs, and fruits, depending on their ability. They may spend 70 to 90 percent of their days foraging, consuming 100 to 300 kilograms of food. The diversity of forage is lower for savannah elephants than forest elephants, but mostly due to availability. This is especially apparent for the desert elephants of Namibia and Mali. Similar to the forest elephant, the seed dispersal and brush clearing of savannah elephants maintain the savannah landscape and promote plant and animal diversity within their range.

THREATS: Savannah elephants are threatened by the rapidly spreading poaching crisis, human-elephant conflict and loss of habitat, climate change resulting in depleted water sources, and barriers to their movement.

POPULATION TREND: Range-wide population decline has been documented for savannah elephants, with some regions experiencing worse declines than others. Over approximately 30 years, savannah elephant populations have declined by 33 percent in West Africa and 76 percent in Central Africa. Populations in East Africa have declined by at least 20 percent, and Southern Africa populations have held strong until just recently when poaching rates began exceeding the birth rate in 2010. About 400,000 are thought to remain, though many conservationists believe there are fewer. As poaching pressures spread east and south and villagers continue to struggle with the consequences of human-elephant conflict, even the most robust populations are at greater risk, as evidenced by Tanzania, a country with one of the largest elephant populations at more than 109,000 that declined 60 percent the 43,000 in just five years.