GIVE TODAY
Forest elephants disperse more seed species, over a greater distance, than any other herbivore in the Congo Basin, making them an important keystone species for the world's second-largest rainforest. 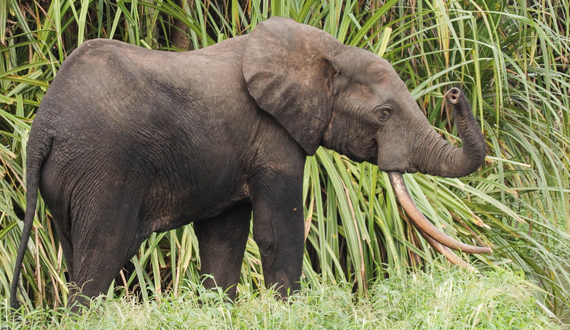 BREEDING: The breeding strategies for forest and savannah elephants are assumed to be mostly the same. Reproductive rates for both species are considered one of the slowest and most energy-intensive. In optimal conditions elephants may reproduce at a rate of 6 percent. Elephants have the longest gestation period of any animal at 22 months, and twinning is rare, though it does happen. Elephants do not reach sexual maturity until they are between 14 and 17 years old, most males, however, are mostly unsuccessful at mating until they are much older, and females may only conceive every three to nine years.

LIFE CYCLE: Forest elephants may live to be up to 70 years old.

FEEDING: Forest elephants are generalists that feed on trees, shrubs, grasses, herbs and fruits, depending on their ability. They may spend 70 to 90 percent of their days foraging, consuming 100 to 300 kilograms of food. Living in the rainforests allows forest elephants the luxury of being highly frugivorous, and the seed dispersal provided by them is crucial to the maintenance of tree diversity in Central Africa — which houses the world's second largest rainforest.

THREATS: Forest elephants are threatened by historical and current rampant poaching, trade pressures, habitat conversion due to the expansion of natural resource extraction and logging, and civil unrest.

POPULATION TREND: Forest elephants have declined by over 62 percent in just nine years (2002-2011), and by 80 percent in two elephant generations (ca. 25 years). Fewer than 100,000 are estimated to remain, which is 10 percent of their estimated historical abundance. As poaching continues unabated, and interest in extracting Central Africa's resources increases while high levels of corruption hinder conservation efforts, forest elephant populations become increasingly at risk.