GIVE TODAY
Elephants mourn their dead, just like people. When a family member or friend of the herd dies, each elephant will touch its whole body with its trunk, smelling and caressing it. Often elephants will stop and take long pauses at a site where a loved one died, even years afterward. 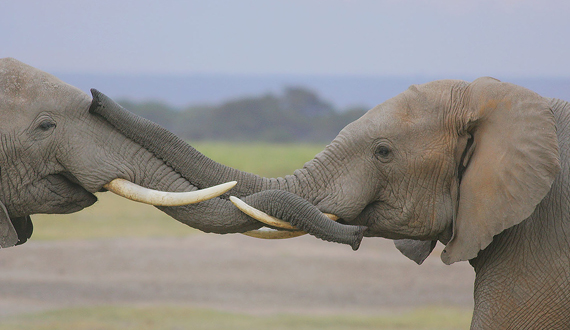 PROTECTION STATUS: Listed as a single species (“African elephant,” Loxodonta africana) as “threatened” with a 4(d) rule for ivory trade

Forest elephants have declined by more than 62 percent in just nine years, and by 80 percent in two elephant generations. Fewer than 100,000 are estimated to remain, which is 10 percent of their estimated historical abundance.

Savannah elephants' range-wide population decline has been documenteds, with some regions experiencing worse declines than others. Over approximately 30 years, savannah elephant populations have declined by 33 percent in West Africa and 76 percent in Central Africa. Populations in East Africa have declined by at least 20 percent, and Southern Africa populations have held strong until just recently when poaching rates began exceeding the birth rate in 2010. About 400,000 are thought to remain, though many conservationists believe there are fewer.