GIVE TODAY
Black abalone can live for 30 years or longer. 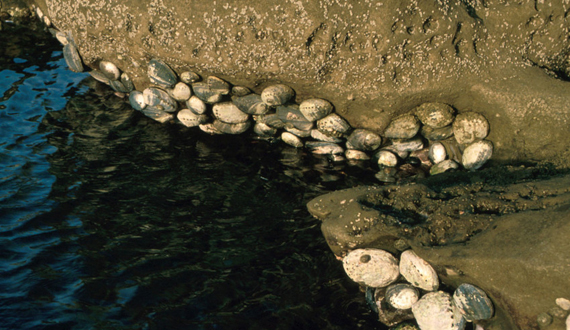 
DESCRIPTION: The ocean-dwelling black abalone has a single shell that is smoother than that of other abalone species. Its exterior is dark blue, dark green, or almost black in color, while the inside of the shell is iridescent pink and green. The shell may grow to be up to eight inches, depending on location and environmental factors. At the shell's edge is the abalone's head, complete with eyes, mouth, and a pair of black tentacles. The abalone's large, muscular foot is shaped like a flattened mushroom and is used to generate suction.

HABITAT: Black abalone cling to rocks in intertidal zones or shallow waters up to 20 feet deep. Juveniles are usually seen in areas with protective crevices, while adults are more frequently sighted on exposed rocks in areas with moderate to heavy surf.

RANGE: Black abalone were historically found between Coos Bay, Oregon and the tip of Baja California, Mexico. They have since vanished entirely from large portions of their range.

MIGRATION: Black abalone do not migrate.

BREEDING: Black abalone reach sexual maturity at a small size, and fertilization is external. Eggs and sperm broadcast into the water through the abalone's pores. A one-inch abalone may spawn 10,000 eggs or more at a time, while an eight-inch abalone may spawn 11 million eggs. Fertilized eggs hatch into floating larvae that feed on plankton until their shells begin to form. Juvenile abalone then sink to the bottom, where they cling to rocks and crevices with their single, powerful foot.

FEEDING: Adult black abalone prefer to feed on algae, such as giant and feather-boa kelps. An abalone eats by partially raising itself off of its rock to trap pieces of drifting algae under its foot.

POPULATION TREND: Once found in densities of more than 11 individuals per square foot, black abalone have been virtually eliminated along the mainland coast of southern California. For nearly two decades, commercial and recreational fisheries picked the coast clean of this species until the California black abalone fishery collapsed in the mid-1980s. The harvest was suspended in 1993, but rather than recovering, the population continued its decline. Scientists predict that black abalone will have no hope of recovery without immediate and active intervention.