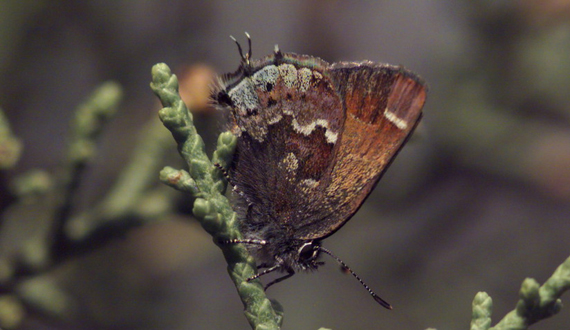 DESCRIPTION: Adult Thorne's hairstreak butterflies have wingspans of about one to 1.2 inches. The forewings and hindwings are reddish brown with dark copper shading on the margins; the ventral surface of the forewing is mahogany brown with traces of lavender. Males bear well-developed scent pads on their forewings and tails on their hindwings. Females are similar in color and maculation to males, but are without scent pads. Pupa are dark chestnut brown, and eggs are round and light green.

HABITAT: The Thorne's hairstreak depends for survival on its Tecate cypress host plant, which is associated with chaparral ecosystems in Southern California and northern Baja California and grows primarily on north-facing slopes from near sea level to more than 4,200 feet in elevation.

RANGE: The Thorne's hairstreak is known only from the vicinity of Otay Mountain in southern San Diego County.

BREEDING: The Thorne's hairstreak is double-brooded, with the first flight season in late February through March, and the second in June. Evidence suggests there may be a third brood in the fall.

LIFE CYCLE: Thorne's hairstreak eggs are laid singly on the new growth of established Tecate cypress host plants and incubate for seven to 14 days. Pupation is in the duff and leaf litter at the base of the plant, and larvae feed on young cypress stems. The Thorne's hairstreak is bivoltine (having two generations per year) and overwinters in the pupal stage. First-generation pupation lasts for 10 to 15 days, and first-generation emergence occurs in late February through March. Second-generation emergence occurs in June through July. First instar larvae initially bore into the young stems of the host plant, but later instars become external feeders. The larval stage lasts 26 to 35 days.

POPULATION TREND: Prior to the 2003 Mine fire, biologists estimated that about 400 Thorne's hairstreak butterflies remained in about eight populations. After the fire, surveys turned up fewer than 100 individual butterflies. Only five very small populations exist.