GIVE TODAY
This butterfly spends its whole life within a few hundred yards of two native plants, seacliff buckwheat and coast buckwheat. 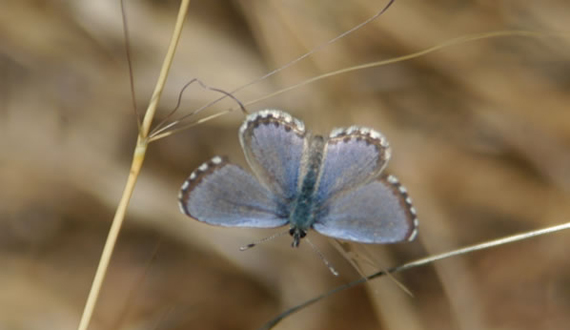 The Smith's blue butterfly may be tiny, but it's endangered in a big way. It spends its whole life within a few hundred yards of two native plants, seacliff buckwheat and coast buckwheat — and is completely dependent on them. But central California's coastal sand dunes and grasslands, where the butterfly and buckwheat live, are also popular spots for development, livestock grazing, off-road vehicle use, and road building. More than half the butterfly's habitat has been destroyed, and the codependent Smith's blue is struggling to survive.

Although the Smith's blue has been listed under the Endangered Species Act since 1976, the ongoing failure of government agencies to properly enforce the law has left the butterfly in dire straits. Protection of critical habitat for the butterfly was proposed in 1977 — but was never actually designated. A recovery plan for the species was published in 1984 — but now it's appallingly out of date. Then the U.S. Fish and Wildlife Service proposed downlisting the species to threatened in 2006 — even though it's almost certainly still in decline. Meanwhile, the Service admits it doesn't know the species' population size or trend, and hasn't established scientific recovery criteria or goals. The Center opposes downlisting, and continues to fight for the conservation of the butterfly's habitat.

We've worked particularly hard for the protection of the Big Sur coast in Los Padres National Forest, key Smith's blue habitat. Since 2001, we've filed numerous appeals and threatened legal action to rein in illegal livestock grazing on public land in Big Sur, forcing the Forest Service to suspend grazing on thousands of acres and refrain from increasing grazing on eight federal allotments. The Center submitted a comprehensive conservation plan in 2003 for management of the four Southern California national forests, specifically suggesting strategies for protecting the Smith's blue. Most recently, in 2006, we appealed the Forest Service's approval of deficient land management plans for these forests.