GIVE TODAY
This butterfly is closely linked to Kearney buckwheat. Larvae feed exclusively on the plant and adults rely on its nectar as a primary food source. 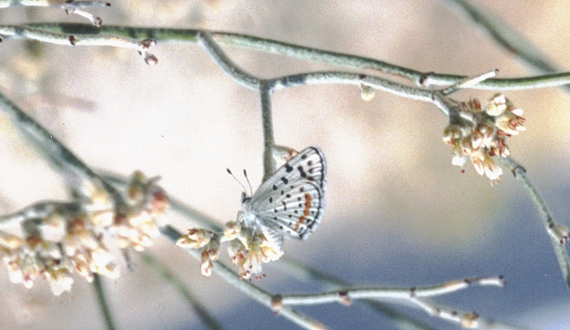 Sand Mountain blue butterflies live in only one place on Earth — within and near the dunes of “Singing” Sand Mountain in Nevada. But over the past three decades, extensive off-road vehicle use on these public lands managed by the Bureau of Land Management has destroyed more than 50 percent of the rare butterfly's habitat and main food source, leaving the species perched on the edge of extinction.

The Sand Mountain blue butterfly is closely linked to Kearney buckwheat; larvae feed exclusively on the plant, and adult butterflies rely on its nectar as a primary food source. Unfortunately, the Bureau of Land Management has allowed off-road vehicle use to destroy much of the Kearney buckwheat that once thrived on the dunes at Sand Mountain. To ensure that the Sand Mountain blue butterfly will have adequate habitat and protection, the Center submitted a petition to list this rare species as federally endangered in 2004.

In 2006, after the U.S. Fish and Wildlife Service failed to respond to our initial petition, the Center filed another suit against the Service to compel a response. In 2007, the Service denied our petition to list the species despite continued threats from increasing off-road vehicle use at the dunes. The Service is staking the continued existence of the species on a new Conservation Plan that relies on largely voluntary measures to stem the tide of habitat destruction from off-road vehicle use. The Center will continue to advocate for mandatory legal protections for the butterfly and its habitat under the Endangered Species Act.