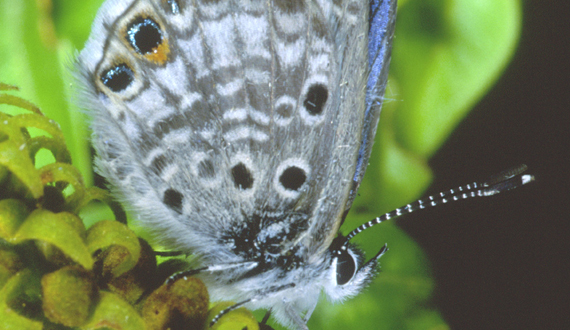 DESCRIPTION: The Miami blue is a small butterfly with a wingspan of only about an inch. Males are bright, metallic blue dorsally, while females are primarily dark gray with blue scaling toward the wing bases and orange-capped, black submarginal eyespots on each hindwing. Both sexes are gray below, with a distinct, wide, white postmedian hindwing band and four black basal spots. Mature larvae vary in color, ranging from light green to maroon. Pupae are black or green.

RANGE: Little detailed and definitive information is available on the extent of the Miami blue's historical range. However, most experts agree that it once commonly ranged from Florida's Hillsborough and Volusia counties in the north to Key West in the south, also presumably occurring in pine rocklands in Miami-Dade County. Over the past few decades, the species' overall distribution and numerical abundance has been significantly reduced. The butterfly was recently known from only a single small, isolated colony site within the boundaries of Bahia Honda State Park on Bahia Honda Key in the Lower Florida Keys. Now it has likely gone extinct there and exists as a few scattered individuals in the Marquesa Keys in Key West National Wildlife Refuge.

MIGRATION: Miami blue butterflies are not known to migrate.

BREEDING: The Miami blue is sexually dimorphic and multi-brooded.

LIFE CYCLE: Within the Bahia Honda colony, females deposit small, pale-green eggs on new, terminal growth of nickerbean and feed exposed on the host. For historic populations using balloon vine, females are known to have deposited their eggs on the plant's developing fruit. Upon hatching, the larvae burrowed into the balloon and fed inside until maturity.

FEEDING: Larval food plants for the Miami blue butterfly include the gray and yellow nickerbean and other members of the pea family, such as acacia and balloon vine.

POPULATION TREND: Once common throughout South Florida, the Miami blue is now limited to only one wild population, estimated at 34 adults in 2012.