GIVE TODAY
Riffle beetle larvae are specially adapted to cling to smooth rocks in fast-flowing water. 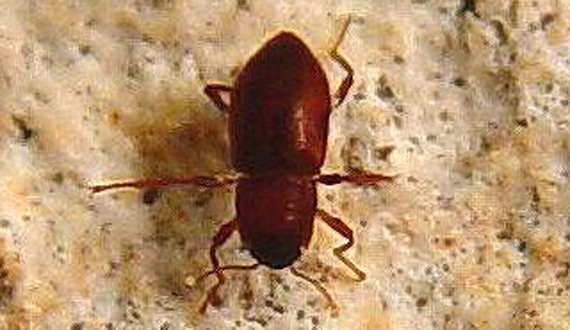 The aquatic Comal Springs riffle beetle sports a mass of tiny, unwettable hairs on its underside, which it uses to maintain a thin bubble of air that allows it to breathe while it swims. But this remarkable respiration method doesn't work well when normally clean, flowing water dries up and stagnates, reducing levels of dissolved oxygen. If groundwater pumping and pollution continue to affect the Texas springs this riffle beetle calls home, it won't have much choice but to suffocate as a species.

The Comal Springs riffle beetle — along with its neighbors the Comal Springs dryopid beetle and Peck's cave amphipod — was officially declared endangered in 1997, but all three species were denied critical habitat. To protect the invertebrates' home, the Center sued the U.S. Fish and Wildlife Service in 2003, and finally, four years later, critical habitat was designated for all three Comal Springs species. But this designation covered a ridiculously small area — not nearly enough to ensure the invertebrates' recovery. In early 2009, we filed suit with allies to gain adequate critical habitat for these three species and 14 others; three years later, the Obama administration finalized critical habitat protection of 4,200 total acres for this and eight other cave-dwelling Texas species. This beetle was specifically designated 54 acres of protected surface habitat in 2013.

All three Comal Springs species once survived a drought that stopped the flow of the springs from June 13 through November 3, 1956. The fact that these invertebrates weren't extirpated at that time says a lot for their tenacity, but all three species were left devastated and still have very small populations. Today, groundwater pumping at Edwards Aquifer is greatly reducing the water flow of the springs in which these species are found, and that could result in years — not months — of significant drying.