GIVE TODAY
June beetles are named after their tendency to fly in late spring evenings. 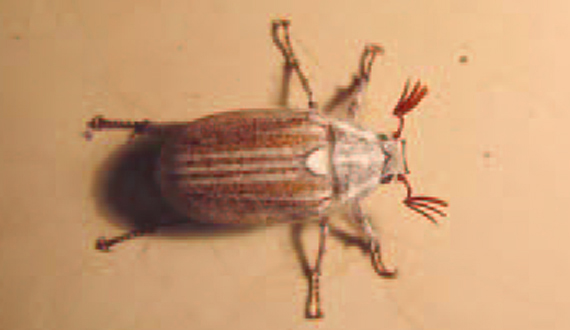 DESCRIPTION: Casey's June beetles are medium-sized beetles ranging from 1.4 to 1.8 centimeters in length, dusty brown or whitish in color with brown and whitish stripes down the back. Their antennae are clubbed with a series of leaf-like plates that can be held together or fanned out to detect scents. Most of the body has a covering of whitish scales, supplemented on much of the head, thorax, and ventral surfaces with fine white hairs.

HABITAT: Beetles prefer fine silts and sands on the southwest side of the Coachella Valley.

RANGE: Casey's June beetles are restricted to only two populations in the southern part of Palm Springs, California. Remaining habitat is roughly 600 acres in approximately nine fragments and actively declining.

MIGRATION: The species is not known to migrate.

BREEDING: Adults emerge from the ground to mate in late March through June with peak breeding typically occurring in mid- to late May. Females surface near dusk and remain on the ground; from roughly an hour before dusk until shortly after dark, males fly swiftly over the ground looking for individual females. After mating, females burrow and deposit eggs within damp sand at varying depths — typically five to 20 centimeters below the dry sand/wet sand interface.

LIFE CYCLE: Casey's June beetle eggs hatch in three to four weeks; larval stages require about 10 to 18 weeks each. Survivorship and many details of the beetle's life cycle are unknown.

FEEDING: Appropriate densities and species of the Casey's June beetle's food plants are not known, but common plant associates include perennials such as cheesebush, creosote bush, saltbush, cholla cactus, catclaw, and desert lavender.