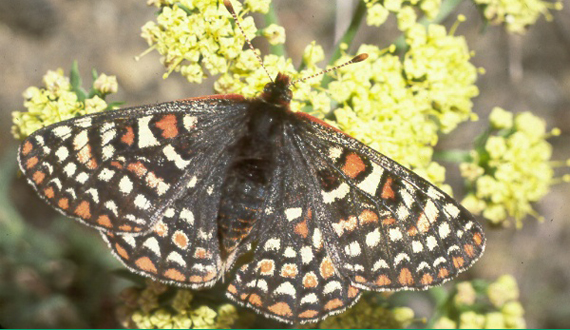 DESCRIPTION: The Bay checkerspot is a medium-sized butterfly with a wingspan of a little more than two inches. The top surfaces of its wings have black bands along all the veins that sharply contrast with its bright red, yellow, and white spots.

HABITAT: Bay checkerspot habitat exists on shallow, serpentine-derived soils, which support the plants on which the caterpillars feed. The butterfly's primary host plant is the endangered dwarf plantain, but larvae also may live on purple owl's clover or exerted Indian paintbrush. Primary Bay checkerspot habitat is native grassland located on large serpentine outcroppings; secondary habitat consists of “islands” in such grasslands on smaller outcrops, while tertiary habitat is on non-serpentine soils with similarities to serpentine soils.

RANGE: Historically, the Bay checkerspot occurred around San Francisco Bay, from Twin Peaks in San Francisco and Mount Diablo in Contra Costa County south to Hollister. The current range is patchy and much diminished, consisting of only five known core areas — one on the San Francisco peninsula, one in San Mateo County, and four in Santa Clara County.

MIGRATION: Bay checkerspot butterflies do not migrate, but long-distance dispersal of the species is well documented: butterflies have been known to fly up to 4.7 miles to find suitable habitat.

BREEDING: Adults emerge in early spring, mating and laying eggs during a four- to six-week-long flight season that occurs between late February and early May. Males typically emerge four to eight days before females. Eggs are deposited near the base of a plantain, owl's clover, or paintbrush plant.

LIFE CYCLE: Checkerspot larvae hatch from their eggs in about 10 days, growing for two weeks or more and shedding their skin three times. Larvae that reach the fourth larval stage, or instar, enter a period of summer dormancy called diapause, which they spend under rocks or in cracks of the soil, emerging with the next rainy season and the germination of dwarf plantain. Larvae then resume their feeding and development until late winter, when they pupate. The average life span for adults is only about 10 days.

POPULATION TREND: The Bay checkerspot has been eliminated from most of its serpentine habitat around the San Francisco Bay, and it is extinct in Contra Costa, Alameda, and San Francisco counties. By 1998, there were only five remaining core areas that supported Bay checkerspots and fewer than 12,000 acres of suitable habitat.