GIVE TODAY
The vermilion darter's range is almost precisely bisected by Alabama Highway 79. 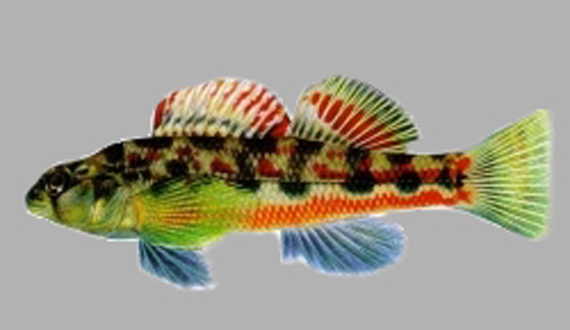 Because of its unique hodgepodge of geologic features, Alabama probably has the most diverse aquatic fauna in the country, with more fishes, snails, mussels, crayfishes, and turtles than any other state. Unfortunately, Alabama also ranks second in the nation for number of extinctions and is in the top five states for number of at-risk species. Among these is the vermilion darter, one of 180 freshwater species endemic to the Mobile Basin drainage. While some fish persist in spite of habitat alteration, this colorful darter can't handle the drastic hydrological changes brought about by impoundments and development — and with its tiny population, that's a big deal.

The vermilion darter makes its home in the Turkey Creek watershed, which drains about 54,731 acres of Jefferson County, the most populous county in Alabama and still growing. Urbanization means that more sediment, unwanted nutrients and toxic chemicals enter the darter's habitat, disrupting aquatic insect communities and coating underwater surfaces. In addition, the six impoundments in Turkey and Dry creeks block dispersal, affect water quality by reducing flow, and add to the isolation of distinct fish populations. All in all, it's easy to see the difficulties the darter faces just in feeding and breeding.

The darter wasn't officially described by scientists until 1992, at which point its population was already dwindling. Seven years later, the Biodiversity Legal Foundation (later acquired by the Center) filed a lawsuit to force the listing of 29 imperiled species, including the vermilion darter, under the Endangered Species Act. Two years after that, the U.S. Fish and Wildlife Service listed the fish as endangered but didn't designate critical habitat, putting this off until resources became “available and consistent with … listing priorities” — that is, indefinitely. In response to a Center lawsuit, the Service finally protected 13 miles of critical habitat for the darter.

MEDIA
Press releases
Search our newsroom for the vermilion darter