GIVE TODAY
Roundtail chub are threatened by nonnative fish introductions and habitat destruction. 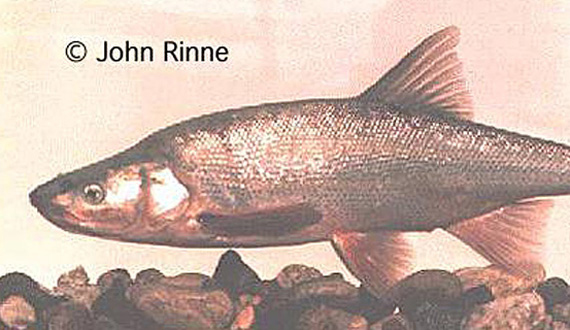 DESCRIPTION: Both fish are minnows with slender, silver bodies and forked tail fins. The headwater chub is dark gray with silvery sides. The roundtail chub is olive gray to silver with a lighter-colored belly. They can reach up to 20 inches in length.

HABITAT: The fish are found in warm streams and large rivers, usually in habitats with slow-flowing water adjacent to areas of faster water. They occupy pools and eddies, often concentrating in swift, swirling water below rapids.

RANGE: The species is restricted to the Colorado River basin and possibly parts of northwestern Mexico. In the lower Colorado River basin, the roundtail chub occupies less than 20 percent of its historic range in only 19 small tributaries to the Gila, Verde, Salt, Bill Williams and Little Colorado Rivers. The headwater chub occupies less than 40 percent of its already-small historic range in 13 tributaries to Tonto Creek and the Verde and Gila rivers.

MIGRATION: These chubs do not migrate.

BREEDING: Chub first reproduce at the age of two to five, spawning in the spring or early summer, depending on flooding. Spawning involves several males escorting a female in close contact about six to 10 centimeters above the substrate. Eggs are scattered randomly over gravel substrates of pools, where they sink to the bottom and adhere to the substrate. They hatch after four to seven days without parental care.

LIFE CYCLE: Roundtail and headwater chubs are believed to have an average lifespan of about eight to 10 years. Fish in larger streams live longer than those in smaller streams. Growth is relatively rapid, but is dependent upon water temperature, habitat size, and other characteristics.

FEEDING: Roundtail and headwater chubs are omnivorous and consume a large variety of insects, algae, aquatic and terrestrial insects, and fish. They are opportunistic feeders and eat whatever food is available.

POPULATION TREND: The species have been extirpated across much of their ranges, and many remaining populations are severely threatened and likely declining.