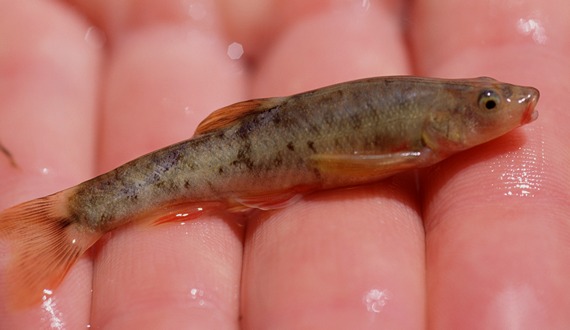 DESCRIPTION: The loach minnow and spikedace are small, sleek, river-dwelling members of the minnow family. Adults measure up to three inches. Loach minnows are colored with a mix of olive and darker pigments and with whitish spots near the dorsal and tail fins. Spikedace have silvery-colored sides have elongated black specks. Their backs are mottled an olive-grey to brownish color.

RANGE: The loach minnow and spikedace were historically found throughout the Gila River basin in western New Mexico and Arizona, but they have been extirpated from most of their historic range. Loach minnows are presently found in New Mexico in the upper Gila, San Francisco, and Tularosa rivers and in Dry Blue Creek. In Arizona, loach minnows are found in Aravaipa, Campbell Blue, and Fossil creeks as well as the White, San Francisco, and Blue rivers. Only four spikedace populations are found in Arizona: in Aravaipa Creek, Eagle Creek, Fossil Creek, and the upper Verde River. In New Mexico, spikedace are found only in the east, middle, and west forks and the main branch of the Gila River.

MIGRATION: These fish do not migrate.

BREEDING: Spawning takes place during spring and is initiated in response to changes in stream volume and water temperature. Adhesive eggs are deposited on the underside of flattened rocks, with nest cavities open on the downstream side. The male, and possibly the female, guards the nest cavity. The number of eggs per rock ranges from five to more than 250. Eggs hatch in five to six days.

LIFE CYCLE: These fish are short lived, usually only living one to two years.

FEEDING: Loach minnows and spikedace are opportunistic, bottom-feeding insectivores. They actively seek their food among bottom substrates rather than pursuing items in the current.

POPULATION TREND: Loach minnows and spikedace were once locally common throughout much of the Verde, Salt, San Pedro, San Francisco, and Gila rivers, occupying both mainstream and perennial tributaries. This range has been dramatically reduced and fragmented, and all existing populations are under threat.