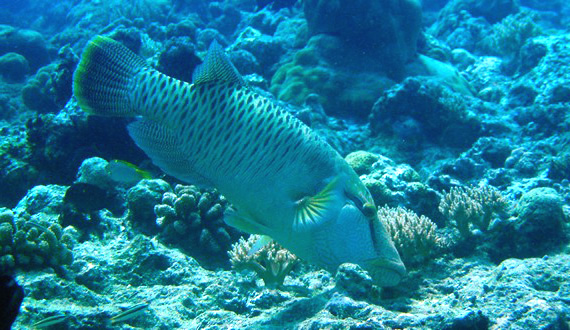 With sumptuous, fleshy lips and a bulbous, protruding forehead, the humphead wrasse is an unforgettable fish. This enormous, colorful coral-reef dweller is slow to reproduce, making it vulnerable to overfishing. Once eaten only by royalty, humphead wrasse are today highly sought after in the luxury food industry of east Asia. And the global-warming-induced die-off of coral reefs is leaving this unique species without a place to hang its hat.

The humphead wrasse is among the most prized species in the lucrative trade of reef fish. For coral-reef ecosystems, this fish is also in hot demand. The wrasse is invaluable not when it's on people's dinner plates — but when it's simply left alone in the clear ocean waters it inhabits. With concern mounting within the scientific community over sinking humphead wrasse populations, the species' imperiled status was given prominence when it was added to the World Conservation Union's Red List and its trade became regulated by the Convention of International Trade in Endangered Species.

In 2007, the Center, aware of the threats of climate change and overfishing, filed a petition to list the wrasse under the Endangered Species Act. The fish needs this protection to aid in preventing greenhouse gas pollution and to anchor its future survival.

MEDIA
Press releases
Search our newsroom for the humphead wrasse