GIVE TODAY
Headwater chubs live for 8 to 10 years. 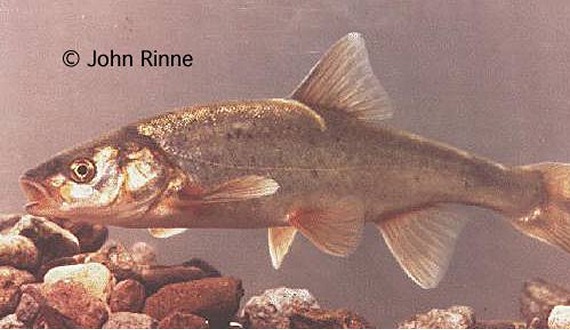 Of the nine chub species native to the Southwest, all are listed or proposed for listing as threatened or endangered under the Endangered Species Act — except for the roundtail and headwater chubs. It's not that these two species aren't imperiled — they've been extirpated from 80 percent and 60 percent of their historic ranges, respectively — but rather that they've suffered from bureaucratic ineptitude for decades. The roundtail chub and headwater chub are valuable indicators of ecosystem health in the Southwest's rivers. In severe decline, they now occupy just a fraction of their historic ranges, so the Center is campaigning to get them recognized after long neglect.

The declines of the fish were noted by scientists as early as 1960. In 1982, the U.S. Fish and Wildlife Service recognized both species as Category 2 candidates for Endangered Species Act listing, which meant that their protection might be warranted but the agency lacked sufficient information to move forward. But in 1996, the Service stopped maintaining its Category 2 list, and the fish were dropped from even consideration for protection.

The Center attempted to remedy this by petitioning for protection of both species under the Endangered Species Act in 2003. After our subsequent 2004 lawsuit demanded a decision on the part of the Service, in 2006 the agency published a 12-month finding that denied protection for the roundtail chub and put the headwater chub back on the candidate list. The Center has sued once again to overturn this finding and convince the Service to reconsider protection for the roundtail chub.

Finally, in 2011, we reached a landmark agreement with the Service compelling it to move forward in the protection process for 757 species, including the headwater chub and the lower Colorado River population of the roundtail chub.

MEDIA
Press releases
Search our newsroom for the headwater chub